Find out how influential myclimate was last year with regard to climate protection! The results are both an affirmation and incentive. With the offsettings, the services and educational projects, there is still plenty of potential. 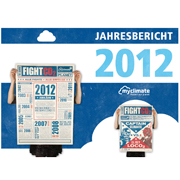 In all three of the foundation's core business areas, myclimate again showed some strong growth this past year.

The CO2-compensations sold have grown from nearly 100,000 tonnes to more than 500,000 tonnes, bringing returns of 11 million CHF. For the first time, donations for climate education projects have exceeded the million CHF mark. More and more school students, college students, interested parties and staff members of companies and institutions were sensitised and activated for climate protection. Carbon Management Services contributed 1.1 million CHF and are inspiring more and more companies to develop sustainable and low-emission business practices. The sum of the overall return is nearly 13.5 million CHF. The affiliate companies myclimate Germany, myclimate Turkey and myclimate Japan are also showing dynamic development.

Take a tour of our interactive annual report with the online guide Captain Climate from your computer by following this link! Harvest time has arrived with the 69 worldwide myclimate climate protection projects. For the first time, both the offset and the generated CO2 reductions passed the mark of one-half million tonnes in 2012. With the submitted prepayments, we realised a reduction of 650,000 tonnes of CO2 in our projects. The projects are developing excellently and are exceeding the original calculations. Therefore, and based on the 20 additional pipeline projects, myclimate could multiply its offset volume many times over.

Between the foundation’s establishment in 2002 and the end of this last year, we sold a total of 1.965 million tonnes of CO2 compensation – and at the beginning of 2013, we reached our two millionth. It took nine years to sell the first million, and not even two years for the second. Since the first million in 2011, customers at myclimate have realised one tonne of CO2 compensation per minute.

In our anniversary year 2012, myclimate was awarded prestigious national and international prizes. Within the scope of the "Momentum for Change" programme of the UN Framework Convention on Climate Change, two of myclimate's climate protection projects received awards as so-called Lighthouse Activities from UN Secretary-General Ban Ki-moon and UNFCCC Director Christiana Figueres. With the MILESTONE of the Swiss Tourism Industry, one of the myclimate climate education programmes was recognized with a prestigious award in the environment category for the "KlimaLokal Zürich Nord" project.