“ACT NOW!” – with this demand pupils of various schools in Reutlingen and many interested citizens sent an appeal to the policy-makers on 26 September 2015 for the upcoming climate conference in Paris at the end of November. 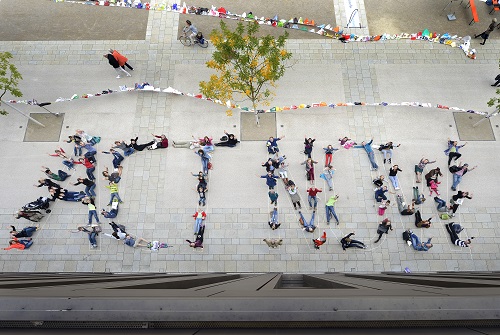 The campaign organised and carried out by myclimate and supported by Reutlingen municipal hall kicked off with a swap session at which about 500 people exchanged no longer needed plastic bags for sustainable cloth bags and were informed about sustainable consumption, among other things, with posters designed by 8th form pupils of Reutlingen’s Bildungszentrum Nord. The campaign against plastic bags is intended as food for thought. “Plastic bags are a symbol of our consumer and throwaway society and for illustration purposes were knotted into a more than 300-metre-long bag chain that wound its way through the Bürgerpark,” said Phillip Baum-Wittke, who works for myclimate in the area of climate education and coordinated the campaign.

From 2.00 p.m., all the participants positioned themselves to form the words "ACT NOW" when photographed from the air. The pictures were then sent to Paris as a message as part of the nationwide climate action day. All photos are available here

The Climate Action Day launched by the Climate Alliance Germany under the motto “Klimaschutz: Vorangehen!” (Climate protection: lead the way!), was part of a Global Day of Action for climate protection. With a view to the international climate negotiations at the end of the year in Paris, people around the globe demanded the transition from fossil energy from coal, oil and gas to 100 per cent renewable energies.
We are delighted that so many citizens participated and, with the demand “ACT NOW!” called upon policy-makers to finally tangibly implement global climate protection. If you want your call for climate protection to be heard directly in Paris, then get on the train together with myclimate and the Climate Alliance Switzerland. More information and tickets are available here.

Click here for information on campaigns in your area to mark the People's Climate March on 29 November 2015.