So far, crossing the Pacific has presented the biggest challenge for Solar Impulse. A school class from Zurich got an exclusive peek behind the curtains. In the Monaco Control Center, they had the chance to follow the first briefing in person. 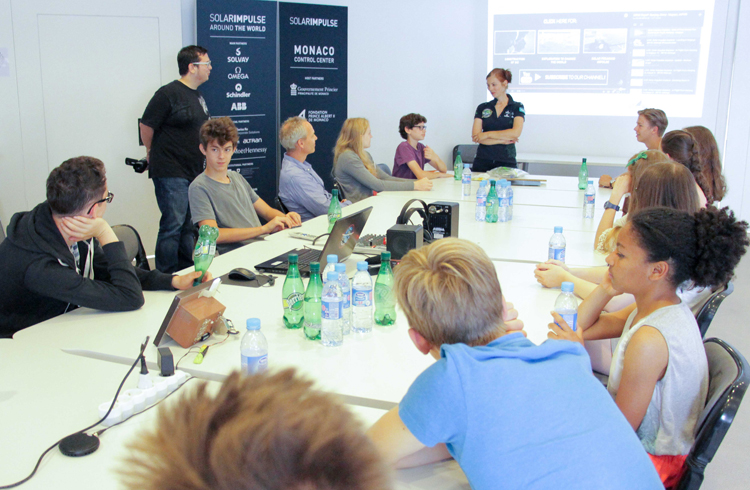 “It couldn't have been a better time. We were there when André Borschberg set off on his pioneer journey,” said Lorenz Leumann, the class’s instructor, who was still caught up in the excitement. His class 3D had already taken part in a competition as part of the Swisscom initiative “Energie- und Klimapioniere”. As a reward for their engagement for climate protection, the students got to travel to Monaco and see the heart of the Solar Impulse Mission.

For three hours, the twelve-person group watched how the specialists at Solar Impulse documented and analysed the first twelve hours of the world-record test. Despite the palpable tension and hectic environment, the Solar Impulse team members such as Christoph Schlettig, Flight Director and Flight Engineer and Martin Bryner, Air Traffic Control Expert, took time to answer the students’ questions.

Shortly before midday, the whole Solar Impulse Team met with Bertrand Piccard in Monaco for the first “handover briefing”. This was a meeting to recapitulate the events of the past twelve hours and to brief the team members for the next twelve hours. The Zurich students listened in on the plans for how to give André Borschberg enough time to gather his strength. At this point, the pilot had been in the air for 15 hours – and awake the whole time.

“I found it very cool that we even got to be there for a meeting and to see all these people - even Bertrand Piccard – in real life, and even take photos with them!", said the 15-year-old Bettina Stehli about the exclusive experience. Even after returning to Zurich, the students were still raving about the pilot and his crew. And they will next year as well when Solar Impulse Part 2 sets out for a trip around the world without using a single drop of kerosene – only the power of the sun.

The initiative “Energie- und Klimapioniere” by Swisscom and the partners myclimate and EnergieSchweiz connects with students from kindergarten to secondary school, and this year with grammar school students as well. It offers children and young adults the opportunity to start their own projects for promoting sustainable energy usage and protecting our climate. Since the beginning of the initiative in September 2010 more than 12,500 students from German- and French-speaking Switzerland and from Ticino have conducted some 550 projects.

Watch the film record mady by VideoGang (German only)!