myclimate Education encourages everyone to make a contribution to our future, through interactive and action-orientated educational programmes. The projects for schoolchildren, trainees and students are not resting on their laurels. 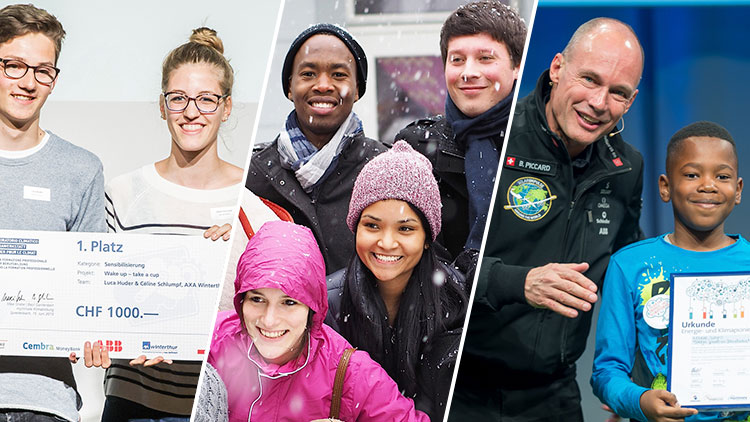 A few days ago, the counter jumped to 13,000. That’s how many energy and climate pioneers there are already in Switzerland. The initiative launched by Swisscom received a special boost this summer. The project ambassadors and Solar Impulse pilots Bertrand Piccard and André Borschberg started their circumnavigation of the globe, and the energy and climate pioneers were allowed to accompany them virtually. One class was even able to follow the start of the world record flight from Japan to Hawaii live in the Mission Control Center. November marks the beginning of the bumper annual highlight, the energy and climate festival in Bern. Bertrand Piccard will use the occasion to present the successful pioneers with awards for their projects. The pilots have repeated their invitation for 2016. When they set off on the second half of their flight, they will once again need the support of many young pioneers.

Launched in 2011, the energy and climate pioneers are an example of a sustainable commitment to education. However, the “Energy and Climate Laboratory” is the unofficial holder of the title of the most successful, sustainable myclimate education project. Since 2007, when the climate workshop was launched as a small project - funded by the State Secretariat for Education, Research and Innovation - the competition has been motivating and inspiring countless trainees and vocational students throughout Switzerland. Since then, 572 specific projects promoting climate protection and a smart use of energy have already been implemented. The ninth year of the project was launched after the summer holidays. It is still possible to register. To mark the tenth anniversary, the Energy and Climate Laboratory has given itself a facelift. Both the logo and the website have been updated and will be relaunched in October.

After the summer course in Costa Rica, the YES courses will be returning to Switzerland. Students and young professionals can apply to participate starting now. The course will take place in Seewis in Grisons. Participants can look forward to hearing from leading experts and speakers as well as a number of outings for hands-on experience. The YES Switzerland 2016 course is being held under the motto “Making sustainability work – Beyond the Paris Climate Conference: Building mind-sets and skill-sets for a sustainable future”. Early-bird registration is still possible until 30 October.