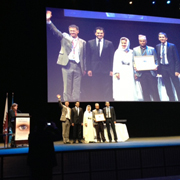 René Estermann, CEO myclimate (left) with Christiana Figueres (centre), Executive Secretary of the UNFCCC, at the award ceremony in Doha on 4 December 2012.