At the Obwalden Cantonal School's traditional spring event, the myclimate education team discussed the topics of climate change and climate protection with 370 pupils. Inspired by the student strikes, the pupils looked for solutions together with the school administration and teaching staff, under the guidance of myclimate. The result was a list of concrete measures to be implemented into the school day. 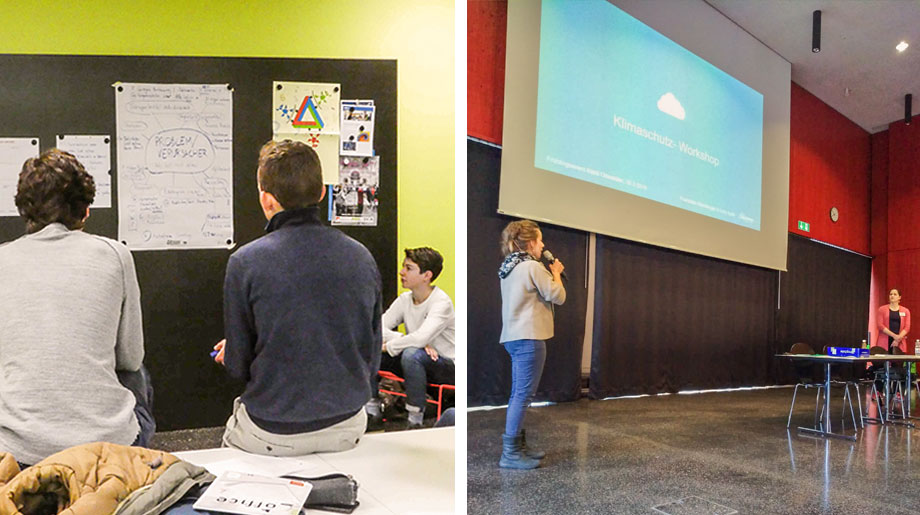 Lara Kubli and Franziska Steinberger introduced the 370 pupils to the topic and organised a workshop programme.

"We have the chance to set a good example today. Small steps can make a difference too," said Patrick Meile, Headmaster of the Obwalden Cantonal School. As a result of the student strike, in which pupils from his school took an active role, Patrick Meile addressed the topic of climate at the school's spring event. "I am called upon to find other opportunities, to give more space to this topic," stated Patrick Meile.

With Lara Kubli and Franziska Steinberger, the myclimate education team introduced the 370 pupils to the topic and organised a workshop programme. Both education experts first demonstrated the significance of the 1.5°C objective using data and case studies. By means of a quiz, the pupils were made aware of the impact on the climate of various travel options for example. More than two thirds of the pupils were able to answer the question of how much farther you can travel with a "budget" of a tonne of CO₂ by train than by car (answer: 25 times farther).

myclimate workshops: Taking the train to Budapest instead of flying

The subsequent workshops were structured by myclimate and led by year six pupils. These had the goal of finding feasible solutions for reducing their carbon footprint that could be implemented into the school day. "We will no longer be flying to Budapest, we will take the train instead," explained year five pupil Nele Zehne. In other groups, consumer behaviour detrimental to the climate, the food in the school canteen or foregoing the use PET bottles was discussed. Headmaster Patrick Meile had promised to make sustainable changes even before the workshops had taken place: "We will persevere with this issue, at the very least, with the ideas that can be feasibly implemented."