Moorland as a climate protector: renaturation of the Königsmoor in Schleswig-Holstein 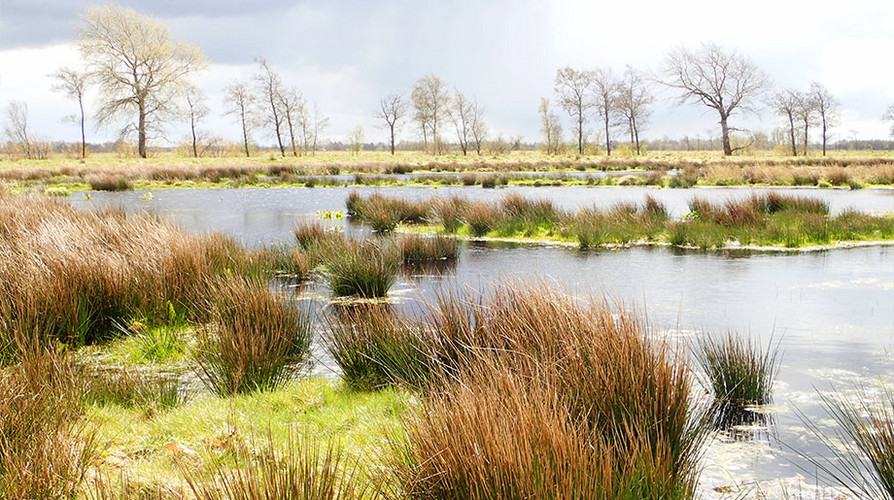 Through this high quality carbon offset project, a section of the unique Königsmoor in Schleswig-Holstein is being renatured. Through rewetting, typical upland moor vegetation can develop here over the long term. This will also help efficiently capture CO₂ and create a valuable habitat for many endangered species – directly on our doorstep.

Healthy moorland has huge potential for storing carbon. The special organic substance that comprises moorland soil developed over thousands of years from dead but only partially degraded plants remains. However, when dried out, moorland soil releases huge volumes of climate damaging greenhouse gases. More than 95 per cent of all high and lowland moors in Germany were systematically drained through the digging of canals and ditches throughout the 20th century. They were used for agriculture or forestry or their peat was mined as a cheap source of fuel. The cultivation of the moorland exposed the stored carbon in the soil which continuously oxidise in the atmosphere on a large scale. With more than 40 million tonnes of CO₂ released annually, drained moorland soil is responsible for 40 per cent of all agriculture-related greenhouse gas emissions in Germany.

The Königsmoor was also previously drained through drainages and ditches and intensively cultivated for agricultural purposes. In order for a drained moor to become a sustainable carbon storage solution again, moorland soil requires water levels to be at near surface level all year round. Thanks to the carbon offset project MoorFutures water levels can be raised. This puts a stop to the advancing peat decomposition and the associated high carbon emissions from the moorland soil.

Biodiversity profits at the same time

Highland moors are fed by rain water. They are characterised by the virtually constant presence of excess water. The multicoloured peat moss retains water like a sponge. As water-rich ecosystems, moors are habitats for endangered species such as short-eared owls, herons, moor frogs, cotton grass and also “carnivorous” sundew. Renaturation promotes biodiversity while also improving flood protection, water pollution control and the microclimate.

Highland moors are fascinating habitats with enormous biodiversity. The rewetting of the Königsmoor is a great opportunity for private individuals, companies or institutions to support regional climate protection immediately on location.

The areas in the Königsmoor were acquired by the Stiftung Naturschutz Schleswig-Holstein (a foundation for nature conservation) and were switched from an intensive to an extensive management without the use of fertilisation. However, the negative impacts of the drainage resulting in the decomposition of the peat and the release of greenhouse gases – cannot be stopped in this way. For a complete renaturation, all ditches and drainages in the moor must be closed and flatwalls made from peat must be constructed. They keep the rain water, which is then stored in the peat, inside the moorland. In this way, the moor remains wet in the dry summer months, too.

By obtaining MoorFutures certificates, private individuals, companies and institutions can take part in the financing for the implementation of the project. The carbon offset project standard MoorFutures was established in 2012 as the world’s first carbon certificates for rewetting moorland by the three moorland-rich German states of Mecklenburg-Western Pomerania, Brandenburg and Schleswig-Holstein in a partnership. The implementation of this project and the scientific monitoring of the impact on the climate is coordinated and financed by Ausgleichsagentur Schleswig-Holstein, a full subsidiary of the Stiftung Naturschutz Schleswig-Holstein.