Ms Marina Basler’s year 6 class at Flurlingen primary school experimented to see what it feels like to live for a day without electricity. However, the electricity was not sacrificed spontaneously, rigorous planning was involved. Alternatives that do not need electricity were sought beforehand for all activities throughout the day, e.g. barbecuing in the forest instead of cooking on the electric stove, or using sunlight or candles for lighting instead of artificial light. 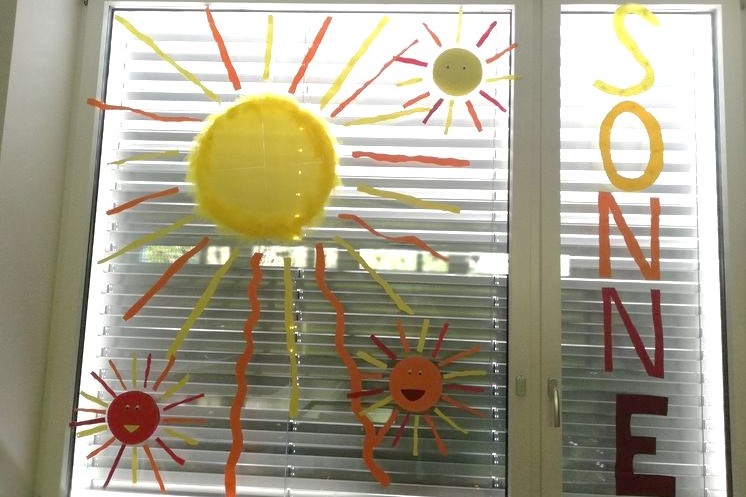 After the experiment, the comments from the schoolchildren who took part were consistently positive. “You can have fun without a mobile phone,” was Adrian’s conclusion. Noel was glad that his cat took on the role of the electronic alarm clock. Lynn took out the board games in the evening instead of turning the television on.
The sun, as an important light and energy source, now adorns one of four windows featuring renewable resources.

23,000 pioneers with over 1,000 projects
The “Energy and Climate Pioneers” initiative launched by Swisscom offers school classes from kindergarten to secondary school level the opportunity to implement their own climate protection projects. Since its launch, the number of Swiss schoolchildren who have become climate pioneers has grown to more than 23,000.

In the course of the Energy and Climate Pioneers initiative, following the two-hour, age-appropriate motivational talk, which was free of charge, the schoolchildren implemented a wide range of projects including a bike shopping service, experiments with renewable energies and cooking, serving and offering climate-friendly lunch menus.

The initiative was inspired by Solar Impulse, the lighthouse project for renewable energies launched by André Borschberg and myclimate patron Bertrand Piccard, which culminated in their circumnavigation of the globe in 2016.