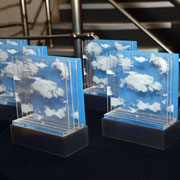 At the fourth consecutive conference of the myclimate representative in Greece, the Centre for Sustainability and Excellence (CSE), held on May 23 in Athens, exemplary companies in terms of greenhouse gas emission reduction were awarded with the myclimate Green Leader Award.

The award, presented by Professor Christos Zerefos, Academic Supervisor of the Research Centre for Atmospheric Physics and Climatology, was given to the following Greek companies which excelled in their environmental initiatives:

Recognition was given to the Bank of Piraeus, FIAT GROUP AUTOMOBILES HELLAS, INTERAMERICAN and COCA-COLA 3E.

The CEO of CSE, Nikos Avlonas mentioned: "The results this year had a controversial character, due to the severity of the economic downturn in Greece. Consumers buy less "green" products and generally give less emphasis on green companies, which is reinforced by the limited advertising promotion. However, the environmental awareness and consciousness of Greek consumers is increasing due to the increase in recycling of more materials and the alternative methods used to reduce travel and heating costs."

myclimate congratulates all the awarded companies on their exemplary commitment!