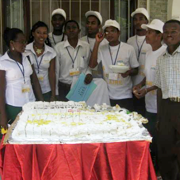 The organisation ADES - responsible for the cooker-project in Madagascar - opened its fifth centre this November. It is located in the city of Mahajanga in the northwest of the island. As much more people have applied for the new jobs in the centre as can be employeed, 12 young people founded spontaneously an association called "Solar Club". Most of these people are students of environmental programms.

The Swiss-Madagascan organization ADES (Association pour le Développement de l'Energy Solaire) has been producing solar cookers and efficient cookers in the sunny southwest of Madagascar for five years and selling them at a reduced price to local households.