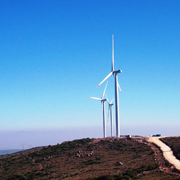 The generated electricity is fed into the national power grid.

On the occasion of the 10-year anniversary, myclimate presents every month one "Project of the month". After the last month’s Project "Efficient cooking in Siaya, Kenya", this month follows the project "Windenergy in Turkey".

Seven wind power turbines are located in the middle of the peninsula of Ceşme in the province of Izmir, Turkey. Since December 2009, they deliver annually renewable power of about 56,250 MWh, which is enough for about 22,000 local people of the Izmir province. With this project, every year 36,188 t CO₂ are saved.