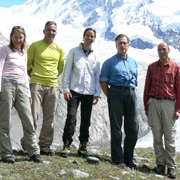 Climate Ambassadors in front of the Monte Rosa mountain

Exactly one year ago, the first myclimate workshop was held with the "Roche Partnering" Team. During the workshop, 80 team members learned more about the CO₂ footprint of their unit and agreed on targets on how to reduce their CO₂ emission. Five "Roche Partnering" Climate Ambassadors went to Zermatt and walked the myclimate Audio Trail, where they collected ideas and gathered inspiration in order to achieve their given target to reduce the flight emissions by 15 per cent.

Finally, the team achieved even more! Compared to 2010, the number of flights was reduced by 23 per cent which corresponds to reduction of 1.000 tonnes of CO₂. An important incentive was, that every saved flight brought the pilot study of the myclimate climate protection project for water purification in Kampala (Uganda) a step forward. myclimate congratulates "Roche Partnering" and is delighted that further ambitious targets were set for 2012: two new telepresence rooms will help to further reduce business flights.

During an internal company event of "Roche Partnering", René Estermann, the CEO of myclimate, handed over a melting ice sculpture as a symbolic present for the good cooperation and the climate protection involvement of the employees. This sculpture is carved out of wood which was found at the bottom of a melting Swiss glacier and is filled with melted ice water from the North Pole.