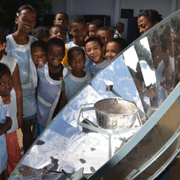 In cooperation with myclimate, the Swiss-Madagascan „Association pour le Développement de l’Energie Solaire“ (ADES) has launched a Gold Standard climate protection project that includes the production and distribution of solar and efficient cookers. Over a period of seven years, the project leads to a reduction of 156,210 t CO₂, while making a contribution to sustainable development in the region. As less or no firewood is needed for the operation of the new stoves (depending on the stove type), there is less deforestation on the fourth largest island in the world. Furthermore, the project creates valuable jobs through the production and distribution of the cookers. ADES, however, does not only focus on the stove aspect itself, but also on awareness raising: Employees of ADES teach environmental lessons in Madagascan villages. myclimate’s role in the project is to buy and market the generated carbon credits.