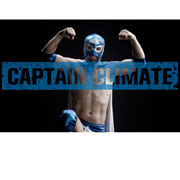 Ten years have passed since myclimate was founded by a group of young ETH students. Ten years, during which myclimate has turned into a professional, internationally active foundation for climate protection with 60 projects in 27 countries and representatives in 11 countries. We celebrate this occasion by means of our anniversary campaign FIGHT CO₂! This is what myclimate stands for: the fight for climate protection and against CO₂ on different levels!

The focus of FIGHT CO₂ is on CAPTAIN CLIMATE, myclimate’s standard-bearer, and on the dominator EL REY LOCO₂! Suspense will be guaranteed! For the present, they fight virtually on Facebook, and soon live: on September 14, at the myclimate anniversary in Bern as well as on September 22, at the freestyle.ch in Zurich.

Be there as well! We raffle 2 tickets for the freestyle.ch and 2 exclusive tickets for the big anniversary in Bern! Confirm your participation by September 10: info@myclimate.org.

Increase anticipation by creating your own CAPTAIN CLIMATE on Facebook and win one of several great prizes!