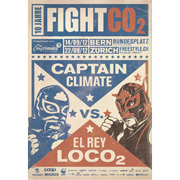 myclimate is going to be ten years old in 2012. The anniversary with the slogan FIGHT CO2 is going to seek even more actitivites for climate protection. The annual report is an invitation to a FIGHT CO2 event at the same time.

With the overall turnover of CHF 12,97 millions (10,7 millions in CO2 offset and just under 2 millions in carbon management services and climate education), myclimate achieves a new record result.