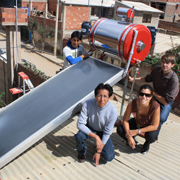 In general, most Bolivian households use unsafe electric continuous-flow water heaters for their supply of hot water. In this new project, efficient and reasonably-priced solar panels that replace the existing system in a sustainable and economic way are being provided.

Approximately double the solar radiation is recorded in Bolivia as in Switzerland, making the country particularly suitable for a solar energy project. The solar thermal energy system consists of a panel and a tank that stores the heated water, with no extra energy being required. The system can be manufactured locally at a reasonable price.

This project, implemented by the non-profit organisation Energetica, concentrates on domestic use in areas where the users have access to tap water. The project facilitates the distribution of up to 10,000 solar systems for approximately 50,000 people. Only solar units that have been produced or at least assembled in Bolivia are permitted for the project.

The project was drafted according to the strict Gold Standard criteria and is to reduce CARBON emissions by more than 30,000 tonnes over a period of time.