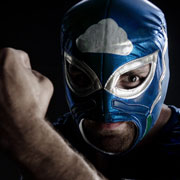 At the end of July, the trailer for the wrestling fight between CAPTAIN CLIMATE and EL REY LOCO2 was made. Heartfelt thanks to the onfilm team, to the advertising agency KSB and Swiss Championship Wrestling!

The trailer of the fight between the two wrestlers provides sporty entertainment and fun. Contrary to this, climate change does not. For ten years, myclimate, its clients and partners have been successfully fighting for climate protection: 1.5 million tonnes of CO2 have been offset. However, this is just the beginning. The potential for climate protection is huge.

On September 22, the spectacular fight will take place at the event freestyle.ch in Zurich. Moreover, FIGHT CO2 will also be performed on September 14 on the Federal Square in Bern, when myclimate invites partners, clients and selected guests to the big anniversary celebration. Join the fight and FIGHT CO2!