Excitement ripples through the IBM Client Center in Zurich-Altstetten as the winners of myclimate Climate Laboratory 2014 receive their awards. They are the best out of 125 projects. 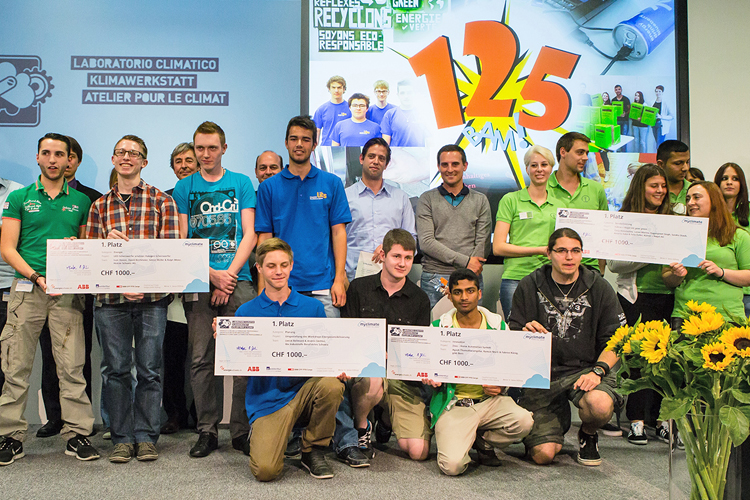 The education project run by the myclimate foundation, celebrated a fitting end to a record year in Zurich-Altstetten. Over the course of 2013/14, 125 teams of trainees designed and submitted their own climate protection projects. That was an increase of 40% over the record-breaking previous year. Four teams particularly enjoyed the awards ceremony as they were ranked first in their respective categories. As well as being commended on their achievements, each team of young students received a cash prize of 1,000 Swiss francs.

In the Innovation category, 3rd year IT trainees Angash Tharmotharampillai, Ramon Marti and Fabrice König from GIBB in Bern won with “Zeus – Home Automations System”, which uses a mini-computer and smartphone app to control standby functions in the home.

The audience award was presented to the “Biel/Bienne of the Future” team of Yannis Portmann, Yannick Schöni and Jan Hänzi, who earned 48 votes. All prizes were endowed with 1,000 francs.

Aside from the awards ceremony, all nominees were given the opportunity to enjoy a guided tour of IBM Switzerland and to visit the SBB School and Adventure Train. All nominated teams presented their projects to the assembled guests in the form of an open market.

Realising this national project would be impossible without an array of professional and financial support. This year’s sponsors: Energie Schweiz, ABB Schweiz, AXA-Winterthur, SBB Cargo as well as the Gottfried and Ursula Schäppi-Jecklin and Werner H. Spross foundations.