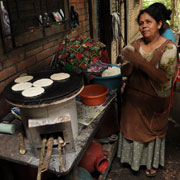 In cooperation with the Northern American Up Energy Group Inc., myclimate launches a new transnational and regional programme for climate protection in four Central American countries, including El Salvador.

Main objective of the programme is to facilitate the underserved, poor communities in the region access to efficient cook stoves. The cook stoves allow a massive reduction of wood consumption for cooking of about 50 per cent compared to the traditional open fireplaces. Furthermore, they reduce the formation of smoke inside the houses. Diseases caused by indoor pollution are still among the most frequent causes of death in El Salvador.

The long-term objective of this partnership is to create an open access crediting platform in which local cook stove manufacturers and project developers alike find an opportunity to benefit from carbon finance.