Pupils of class 5b of the Seidenberg School in Gümligen, Berne have produced seven educational films on the subject of climate change. These were shown to a larger audience as part of a film festival organised by the class. This extraordinary project is one of more than 400 created this year as part of the initiative "Pionniers de l’énergie et du climat". 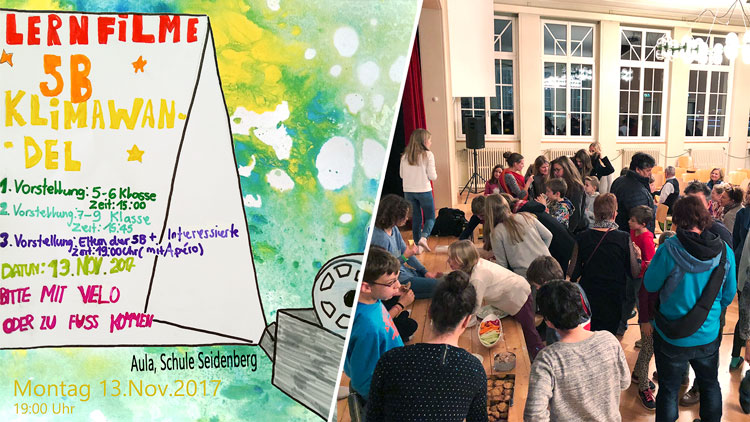 Class 5b with teacher Mirjam Hunkeler was divided into seven groups after a quick introduction to the Pionniers de l’énergie et du climat initiative. Each group addressed a specific topic related to climate change and translated it into a script. The result is seven completely different learning films.

The films address the following questions: What causes climate change? How can less CO₂ be used? What happens when the sea level rises? What are the consequences of hurricanes? What kind of natural disasters are there? How can you calculate the CO₂ footprint of a recyclable water bottle? And how does climate change affect Switzerland? The films were put together in different ways. There were videos that were made with a stop-animation technique with backdrop sets, as well as movies with stick puppets. Explanatory videos alternated with fictional stories that addressed the subject matter.

All in all, the class thrilled around 250 classmates, teachers, parents, siblings and acquaintances over two performances. Students of class 5b led the evening and even organised an aperitif using seasonal ingredients, serving up warm pumpkin soup and an apple pie for the evening performance.

The films of class 5b of the Seidenberg School from Gümligen, Berne on YouTube

With its film and festival project, the class from Gümligen is one of more than 450 to register in 2017 alone to participate in the Energy and Climate Pioneers programme. As a result, the 2010 project, which was initiated by Swisscom and supported by EnergieSchweiz, has now reached more than 20,000 pupils of all ages across all Swiss language regions. In total, more than 900 actual projects were carried out via the initiative. It’s still possible to get involved in "Pionniers de l’énergie et du climat" project for 2018.