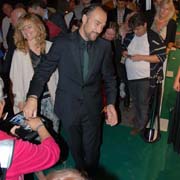 Carlos Leal, swiss actor and Rapper of the band Sens Unik (here on the green carpet of the Zurich Film Festivals), will be first ambassador of the KUONI "Save the Beauty"-fillet. In the context of the Zurich Film Festival KUONI launched the "Save the Beauty"-fillet, which will be given to all travellers who offset their flight emissions by buying a myclimate-ticket. Hereby, the festival’s main sponsor KUONI promotes climate neutral flights as part of its “Save the beauty” campaign.

Leal plays the main role in "Sennentuntschi", the opening movie of the 6th Zurich Film Festival.