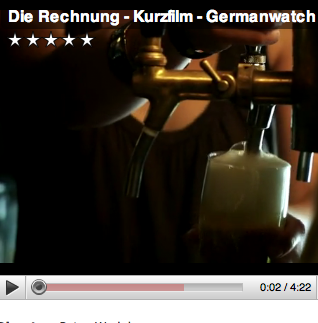 Germanwatch, a German NGO, presents in a well staged and well staffed short film the issue of a sustainable lifestyle in a provocative way. At the same time the film questions the fairness of how the industrialized countries, emerging and developing countries are bearing the consequences of the climate change.

The film, which originally emerged from a short film contest, became famous all over the world within a short period of time after being publicized on youtube. Due to this success the attention of the film experts was drawn to the “The Bill“. As a result, the movie was nominated for the Viral Video Award 2009. Winning this award would lead to a presentation of the movie at the 25th international short film contest in Berlin from the 3rd to November 8th 2009.

If you wish to support this nomination watch the movie (it lasts about 4 minutes) and vote for it on Youtube.