500 young people pulled it off. At the myclimate Climate Conference Simulation on 7 November at Stadthall Reutlingen, the students managed to limit global warming to 1.8 degrees Celsius by the year 2100. With this experience, they sent the “ACT NOW” message to the real climate conference in Bonn, calling on politicians to take quick action. 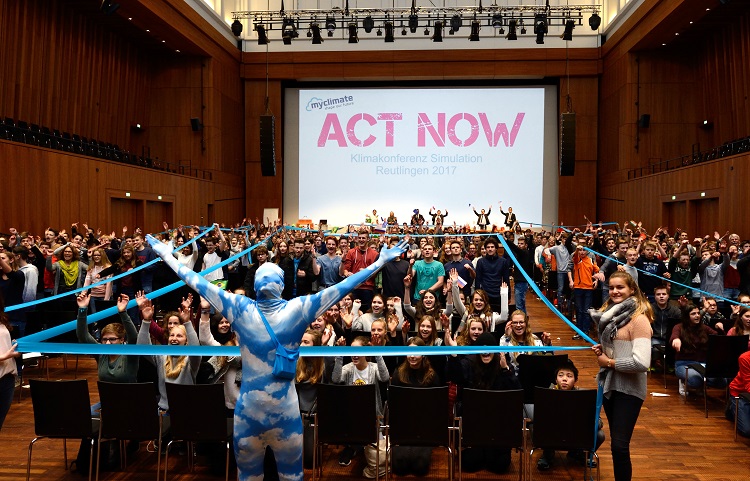 Over 500 young people send their demand for the climate conference in Bonn to “ACT NOW”. (Image: Frank Pieth)

They did it! Global warming on Earth has been limited to 1.8 degrees Celsius by the year 2100. A huge success for the more than 500 students from a total of six schools in Reutlingen, Pfullingen and Tübingen.

To go back to the beginning: the participating young people waited anxiously in the large hall of Stadthalle Reutlingen to take their first time trip into the year 2020. A journey into the future, with the participants invited to decide themselves as a population whether humanity will succeed in keeping global warming up until the year 2100 within the 2-degrees-Celsius mark set in Paris. In the worst case, warming could have reached over 4 degrees.

The students took part in the myclimate Climate Conference Simulation. This innovative and hitherto unique educational campaign was planned by myclimate Germany to take place at the same time as the climate conference in Bonn and took place for the first time in November at the Stadthalle Reutlingen. The aim of the event was not to conduct a single negotiation, as in otherwise well-known climate conference simulation games; instead, it sought to use the three conferences in 2020, 2035 and 2050 to learn what impact the decisions of the present will have on the future – the future in which today’s young people will be in charge – and where humanity will find itself in the year 2100.

The students were able to actively take part in the simulation by choosing how to vote at the individual conferences. They were organised in proportion to the world population into groups of countries and were able to decide whether their country should contribute a lot or rather less to climate protection. During the simulation, a very realistic scenario arose: while in the first conference in 2020, the enthusiasm was substantial and the populations of the countries decided on ambitious climate protection for the next 15 years, this was more muted for the 2035 conference vote, slowing the climate protection efforts significantly. By the year 2050, however, due to environmental damage and extreme weather conditions, the road to a positive future was once again taken. Over the course of several decades, the young people were thus able to limit global warming to 1.8 degrees and thus stay below the 2-degree mark.

“We are delighted that young people have chosen a way to meet the 2-degree goal,” says project manager Phillip Baum-Wittke of myclimate, “because it is the future of the young generation for which we created this simulation. The young people present today will, for example, be around 50 years old in the year 2050 and already have their own children.”

It could have been different. In fact, the course of the simulation was completely open. The figures and graphs were changed depending on how participants voted. If the young people had constantly spoken out against climate protection, the temperature would have risen to over 4 degrees by 2100.

“The simulation is a very good campaign and a good thing to experience. I think it's important to listen to us and not just the adults or the politicians, because we younger people are the future.” If we are to minimise the warming of the earth for this future, it is necessary to act as quickly as possible. And to carry this message from the Stadthalle in Reutlingen to the outside world, the participants stood in the formation of a large “ACT NOW” at the end of the event.

From these recordings, myclimate produced a video that was directed at the representatives of the world community present in Bonn. The video was an appeal to put ambitious climate protection in place now and to bring the 2015 Paris climate treaty to life. The appeal wasn’t just to politicians, but to everyone.

ACT NOW! - For a worthwhile future for the young generations of today.

The myclimate Climate Conference Simulation 2017 in Reutlingen myclimate thanks all the funding partners and supporters for their financial and specialist support. The project was helped by the friendly support of Stadthalle Reutlingen, Engagement Global (with funding from the Federal Ministry for Economic Cooperation and Development), the Naturstrom Foundation, BMW Automobile Center Menton, Schwörer Haus, Vögele, Kreissparkasse Reutlingen, the city of Reutlingen, the Baden-Württemberg Foundation for Development Cooperation, Network Environment of IHK Reutlingen, and FairEnergie.