Last year, sixth-graders at Wauwil (LU) primary school helped raise awareness about climate protection and sustainability as part of the nationwide Swiss school project «Energy & Climate Pioneers». Friends, families and acquaintances were involved in the project through a total of 64 energy promises. The initiative has not only benefited the environment. The class itself won the «Energy & Climate Pioneers Climate Day» prize. Within the framework of this day of action, the children in Wauwil were treated to a series of educational and interactive activities that culminated in a major concert by Knackeboul. 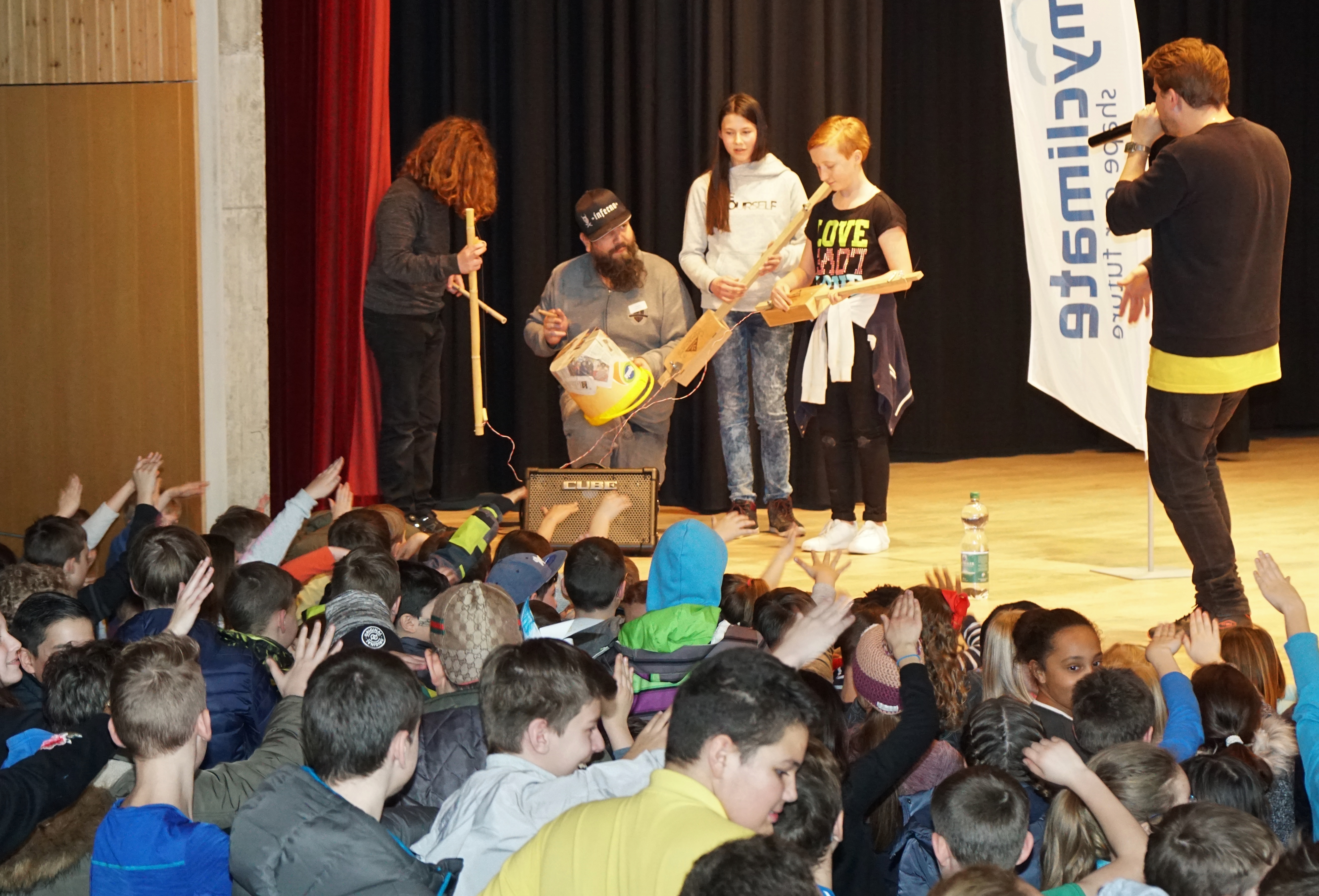 On Thursday, 15 March, the school in Wauwil was one of many that opened the doors to its classrooms as part of the Day of Open-Minded Primary Schools.  In the afternoon, members of the «Energy & Climate Pioneers» project team visited the school in Canton Lucerne. An interactive programme of workshops gave the schoolchildren an opportunity to consider the topics of climate and energy in a playful manner. With beatbox classes, climate games, dance performances and graffiti workshops on the playground, there was plenty to see and do in the afternoon.  At snack time, there was delicious apple cake from Wauwil’s organic bakery as well as organic apples and fruit juice from the region.

The festive climax of the event was a concert by the Bernese performance artist and beatboxer Knackeboul, who really got all the participants going at the end of this memorable day.

Fifth- and sixth-graders from Wauwil School regularly take part in the Swiss-wide school programme «Energy & Climate Pioneers». As part of the new project category «Together for more sustainability», pupils are given an opportunity to put energy-saving tips into practice at home together with their family and enter a prize draw.  In all, the 2017 class of sixth-graders amassed a total of 64 energy promises. If all of them are kept, these 64 energy promises will save up to 5141kWh or CHF 2657 a year. That's enough saved energy to cycle for 321,372km! The class entered their project in the major «Energy & Climate Pioneer Climate Day 2017/18» prize draw – and won.

The class from Wauwil that secured these climate promises was one of more than 450 classes that took part in «Energy & Climate Pioneers» in 2017. The project, which was initiated by Swisscom in 2010 and is supported primarily by SwissEnergy, has already reached more than 22,000 schoolchildren of all ages and in all the linguistic regions of Switzerland. In total, more than 1000 specific projects have been conducted within the framework of the initiative. It’s not too late to take part in the 2018 edition of the «Energy & Climate Pioneers» initiative.