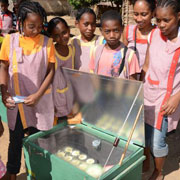 At a public exhibition on the subject of energy for cooking, held on 30 and 31 March 2012 in Tana, the Swiss-Madagascan partner organisation ADES (Association pour le Développement de l’Energie Solaire) was inundated by buyers of their cookers: 500 pieces were sold, but there was such a strong demand that over 1’000 could have been sold! Besides local buyers, the exhibition attracted also members of the WWF as well as the Swiss ambassador.

The increased demand temporary lead to delayed deliveries of production material at the production centres in Madagascar. Consequently, it has already become apparent that this year’s target of producing and selling about 10’000 cookers will be surpassed.