The Energy and Climate Laboratory, the nationwide myclimate education competition for apprentices, awarded the prizes for the best projects of the year at the University of Applied Sciences in Rapperswil (HSR). This year, teams from Geneva, Chur, Bern and Griesser AG from Aadorf were honoured for their special achievements. 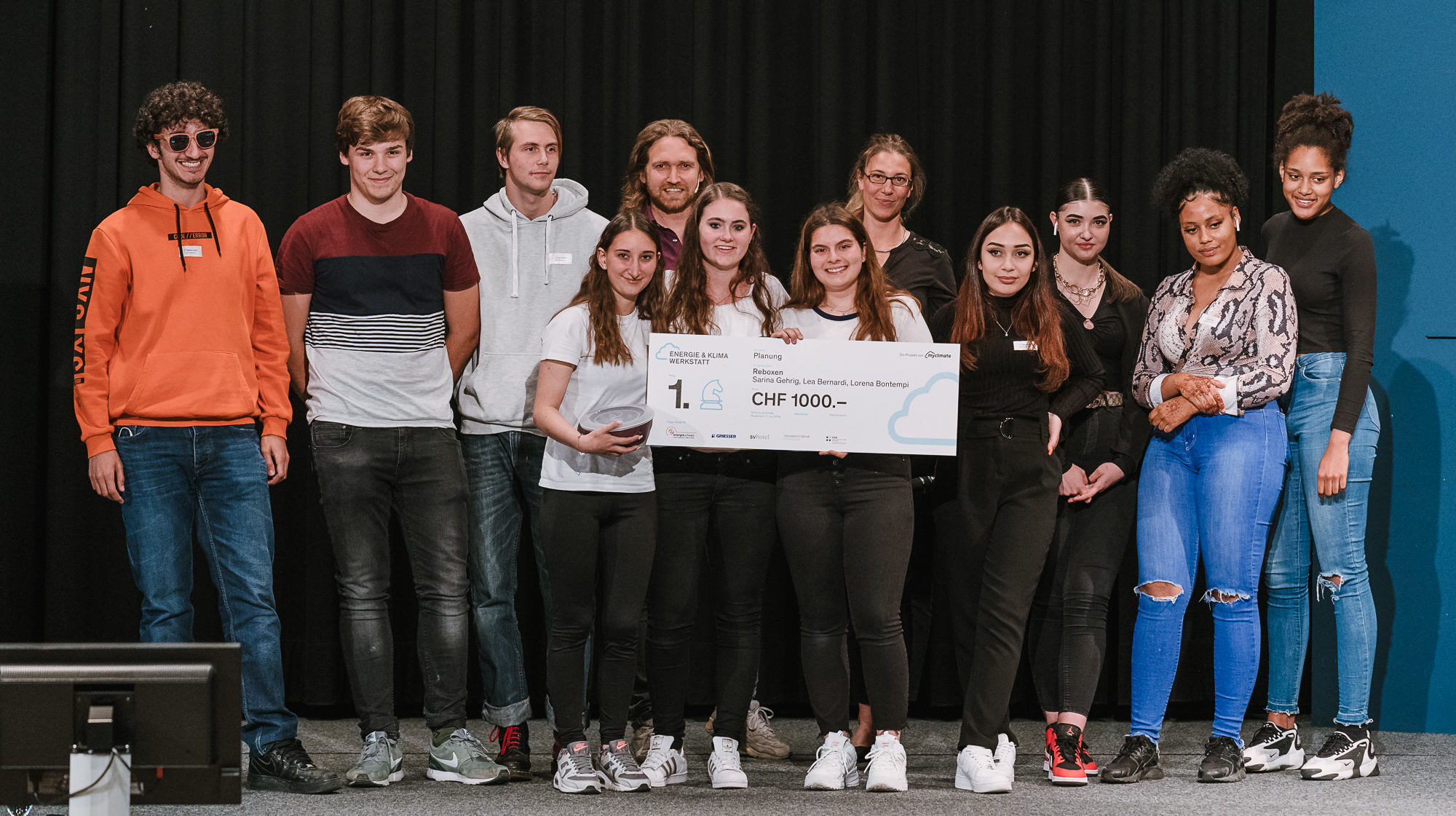 The award at the HSR was the culmination of the project year of the myclimate foundation's "long-serving" educational project. Since 2006, apprentices have been able to implement their own projects within the framework of the energy and climate workshop in the company or at the vocational school, gaining valuable practical experience and generating added value. In the 2018/19 training year, a total of 139 projects were submitted by more than 300 Swiss vocational learners. Twelve teams were placed on a shortlist in advance, three each in the four project categories of energy, sensitisation, innovation and planning. In addition to their achievements, the four category winners also received a cash prize of CHF 1,000.

The first prize of the day was awarded in the category "Sensitisation". With Aline Zandona and Noa Sbaï from the Centre de Formation Professionnelle Arts Genève, Interactive Media Designer in his third year of training, a duo was able to convince the expert jury the most. Their project was entitled "E-Commerce". Using brightly coloured posters, they sensitised teachers, classmates and the general public in Geneva to the environmental impact of online shopping.

Lorena Bontempi, Sarina Gehrig and Lea Bernardi from the Education Centre for Health and Social Affairs (BGS) in Chur were delighted to receive the main prize in the "Planning" category. Their project "Reboxen" has its origin in the excessive and often unnecessary use of plastic. The three budding health and care specialists, on the other hand, developed a reusable tableware concept for their school canteen. Today, they still use disposable plastic packaging.

In the "Energy" category, a trio of learners from Griesser in Aadorf were convincing. Manuel Keller, Luca Marti and Jelisej Tschan identified various ways of effectively saving water at the Griesser plant in Aadorf. The measures concern both the sanitary areas and the drinking water taps. With the measures already implemented and planned, the three apprentices calculated annual cost savings of more than CHF 12,000. Last year, all Griesser apprentices took part in a project competition, the Company Challenge.

"PET++" was the project title of the jury favourites in the Innovation category. Enis Badoglu, Flavio Lang and Nick Weyermann are budding computer scientists from the Gewerblich industriellen Berufsschule Bern (GIBB). The core element of their project was to construct a PET waste bin which, when a PET bottle is thrown in, thanks the person who throws it in and reveals an interesting fact about PET as a recyclable material. In the first practical trial, around 10% more PET bottles than usual were collected. With a corresponding scaling, the three young Bernese expect significantly higher recycling rates.

At the award ceremony "Generation Aktion" 2019, a team was selected for the daily prize for the best presentation on site, on stage and at the previous project market by all those present. The team "Une serre pour plus de vert" was delighted with the prize donated by the programme partner SV Hotel. Djomée Keita, Sara Guedes, Seyna Keita and Andrea Leticia, KV students from the first year of the school ceff St. Imier from the Bernese Jura convinced with a sympathetic, animated and bilingual presentation.  The quartet started in the planning category. The audience prize could already be voted on publicly in advance. The prize was awarded to the team "Eole pour notre école" (Kylie Vuilleumier, Trish Mella, Julien Brun, 1st year of apprenticeship, Commerce, ceff Artisanat, Moutier).

The event was entitled "Generation Action". Before the award ceremony, the two young entrepreneurs Anna Stünzi, President of the ThinkTank Foraus, and Lucie Rein, Managing Director Switzerland of the innovative Startup toogoodtogo, encouraged the present apprentices. In the stage interview both confirmed that it takes courage to get involved, but that the possibility of changing the world with "backpacks, laptops and bicycles" is worth the courage. They should get involved and stand up for their convictions. The project year and the award ceremony in 2019 were made possible by the support of partners such as EnergieSchweiz, Griesser Schweiz, SV Hotel, the Adecco Group Foundation and the host University of Applied Sciences Rapperswil HSR.

The energy and climate workshop

The Energy and Climate Workshop aims to create knowledge about the environment and the efficient use of energy and to combine commitment with technical skill, innovative spirit and design skills. The task of the students is to develop products and projects that reduce CO₂, promote energy efficiency or encourage the general public to take measures against climate change in everyday life. The myclimate energy and climate workshop is a national project competition for all learners. So far, 1157 projects have been submitted by more than 9,000 learners.

Link to all winning teams