The Energy and Climate Laboratory, the countrywide myclimate educational competition for trainees, celebrated the awards for the best projects at the Renaissance Zurich Tower Hotel. Teams from Berne, Geneva, Domdidier/FR and from several locations of Kühne und Nagel AG were pleased to receive the acknowledgement of their achievements as well as prize money of 2,000 francs. Before the awards ceremony, Patrick Kutschera, Managing Director of EnergieSchweiz, Pascal Strässle, member of the management of Griesser AG and Marc Heim, Head of Division Switzerland Emmi AG, answered trainees' questions on the topic of "Today, trainees – tomorrow, drivers of a sustainable economy". 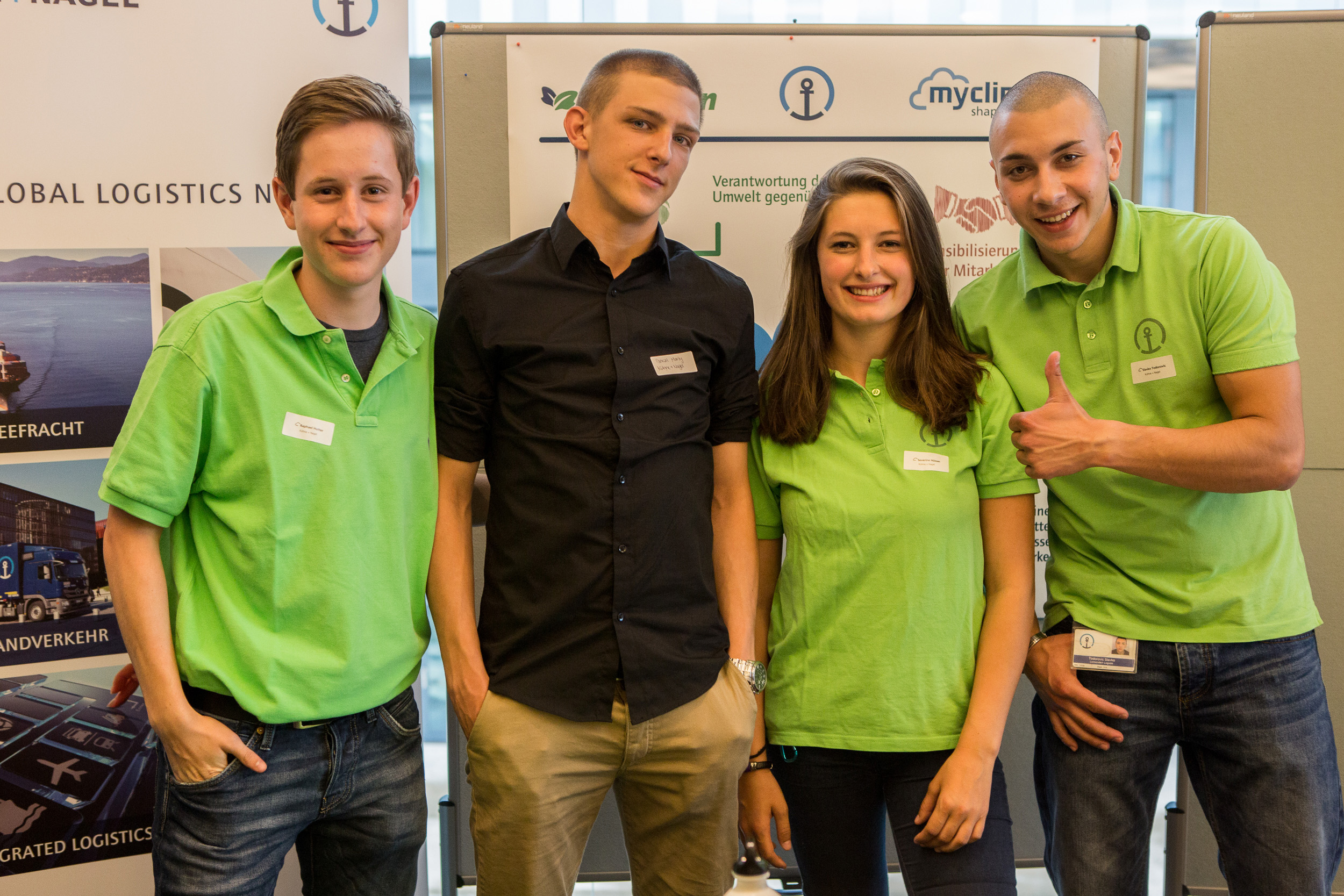 The presentation at Renaissance Zurich Tower Hotel was the crowning glory in the anniversary year of the "most senior" educational project by the myclimate foundation. Since 2006, apprentices and trainees in companies or at vocational schools have been able to implement their own projects, thereby gaining valuable practical experience and generating added value. In the training year 2016/17, a total of 185 projects were submitted – more than in any other year previously. Twelve teams were placed on a shortlist beforehand, three in each of the four project categories: "Energy", "Sensitisation", "Innovation" and "Planning".

The winning teams The first prize in the Sensitisation category was awarded to Arthur Groebli, Mélissa Biondo and Melina Reymondin, interactive media designers in the third training year at Centre de Formation Professionnelle Arts Genève. They impressed the jury with their project "Challenge Ecomen". For this, they installed three conspicuous recycling containers on the school grounds. Their goal was to considerably increase the quantity of cleanly separated refuse in just one week. In addition, they drafted an accompanying communication concept.

There was great excitement for Severine Hüsser, Gizem Koyuncu, Ilayda Cay, Raphael Hutter, Slavko Todorovic and Pascal Marty, prospective business managers for international transport logistics at Kühne und Nagel AG, about the main prize in the Energy category. Their project "PET vs water dispensers" aims to banish PET bottles from use and to save approximately 7,700 kg of CO₂ per year through this change.

In the category Innovation, Micaela Gianini, Nora Mayer, Alexandra Howald and Sarah Grandjean, BMS trainees in the second training year at the Gewerblich Industrielle Berufsschule Bern (GIBB) were impressive. With "TAKE PART", they created an alternative to plastic cutlery at GIBB. They provided stainless steel cutlery in a box as an experiment, which is more energy-efficient as cutlery, through its repeated use.

"Replacing paper mail with a simple email", Ivan Pizzimento, Mattieu Gachet and Pascal Reymond describe their planning project "A step towards digitalisation, a step towards ecology", for which they were awarded first place. The polytechnicians and automation engineers in the third training year at Wago Contact SA in Domdidier in the canton of Fribourg calculated a saving of 18,000 sheets of paper, 6,000 envelopes, and thereby 166 kg of CO₂ and costs of around CHF 6,250 per year.

The project year and the awards ceremony 2017 were made possible by the main programme partners SuisseÉnergie, Griesser Storen, AXA Winterthur and the host, SV Hotel.

The touring exhibition to celebrate ten years of the Energy and Climate Laboratory provided the framework for the occasion. The modular exhibition with a welcoming address by the President of the Confederation, Doris Leuthard, which has been touring Switzerland since March, was designed in cooperation with Berufsschule für Gestaltung from Zurich. All of the 679 projects ever carried out by trainees are presented here.

In addition to the exhibition, the twenty-minute interview with Patrick Kutschera, Pascal Strässle and Marc Heim provided a further highlight in the programme of the awards ceremony. During this they answered questions on the need for specialists for the Swiss economy in future. The questions were collected in advance from the trainees.

The Energy and Climate Laboratory

The goal of the Energy and Climate Laboratory is to accumulate knowledge on the environment and the efficient use of energy and to combine commitment with technological skill, innovative spirit and design expertise. The workshop participants' task is to develop products and projects that reduce CO₂, promote energy efficiency or raise awareness among the general public about everyday actions to prevent climate change. The myclimate Energy and Climate Laboratory is a national project competition for all those in education or training.

To date, 864 projects from more than 8,100 trainees have been submitted. This Switzerland-wide project would be impossible without professional and financial support from various sources. Since 2015, SuisseÉnergie has not only provided input in terms of content, but also acts as the primary partner and the inspiration for the name.