The largest sporting event in Switzerland last year was completely climate neutral. The recently-released sustainability report on the 2019 Swiss Wrestling and Alpine Festival (ESAF) in Zug, co-authored by myclimate, represents a practical document to facilitate the climate friendly implementation of large events in the future. 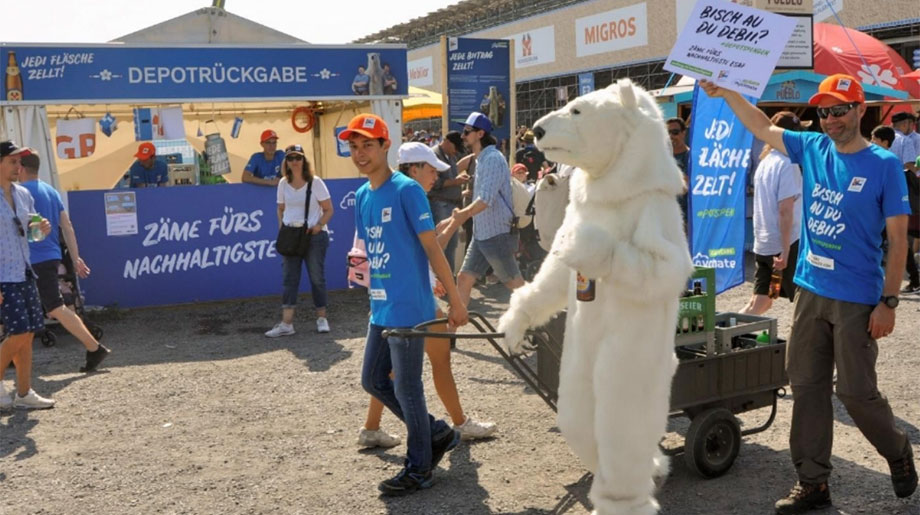 The official sustainability report on the Swiss Wrestling and Alpine Festival was presented in Zug. This document about the largest sporting event in Switzerland in 2019 was co-authored by myclimate and encompasses all three dimensions of sustainability over 44 pages. On the basis of calculations and with the help of visitor surveys, it shows that the planned measures and decisions worked. The sustainability goals set beforehand were reached and even surpassed.

“This report offers concrete measures and planning help for future events, whether sporting or cultural, so that they can be staged as sustainably as possible. It also includes clear assessment criteria and decision guidelines for creating functional specifications when awarding contracts for an event”, says Cornelia Rutishauser, Corporate Partnerships Manager at myclimate and co-author of the report.

Sustainability and climate protection at ESAF 2019

myclimate calculated the carbon footprint of ESAF 2019. At the same time, measures were developed together with the event organiser within the framework of “Cause We Care”, so that the festival could be as climate friendly as possible.

According to myclimate’s calculations, the highest CO2 emissions in Zug did arise from mobility, as they normally do, but instead came from catering.

The ambitious goal of having more than 80% of visitors arrive at the festival by public transport or bike was more or less reached.

For the first time in Zug at an ESAF, a deposit was imposed of one franc per glass bottle or in part per plastic cup. The goal was both to recycle as many bottles as possible and to minimize the danger posed by shards of glass. At the same time, visitors were able to contribute to a sustainability fund by donating their deposit, in line with myclimate’s “Cause We Care” principle. During the presentation of the report, ESAF-OK President, Heinz Tännler, announced that 110,000 francs found their way into the specially organised sustainability fund in this way. With money from the fund, which sponsors and OK also contributed to, local climate protection measures will be implemented. In addition, some of the money will go to completely offsetting greenhouse gas emissions from two myclimate carbon offset projects in Uganda and Nicaragua.

Cornelia Rutishauser draws the following conclusion: “The choice of the urban location, which was easy to reach from everywhere in Switzerland, was decisive for the relatively low carbon footprint. This, and the integration of public transport into the ticket, prevented a much higher CO₂ value. The use of existing infrastructure and simplified materials transport also speaks for the selection of this location.”