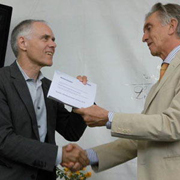 Federal Council and Environment Minister Mr. Leuenberger proclaims the Locarno Film Festival as a role model for the Swiss government. 70 percent of the vehicles used at the Film Festival are hybrids, cutting off far better than the federal government. At a press conference on Saturday Mr. Leuenberger awarded the festival’s president Marco Solari with the myclimate-label. Furthermore, as a patronage committee member of myclimate, Mr. Leuenberger hopes that other major events will follow the example of the film festival and offset their CO2-emissions.

Supported by sponsors, the festival offsets its CO2-emissions with myclimate and therefore being carbon neutral. With a yet to be allocated amount a project in northern India will be supported for the production of clean fuel from bio-waste.