In mid-November, some 1,500 young climate pioneers from all over Switzerland converged on the "Umwelt Arena" (Environment Arena) near Zurich where they were honoured by Bertrand Piccard for their commitment to climate protection. 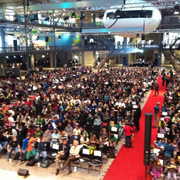 1,500 pupils in the Umwelt Arena Spreitenbach

Today, 77 school classes from all over Switzerland, which had been actively involved as climate pioneers during the 2011/2012 school year, came together within the framework of the "Climate Pioneers" initiative to celebrate at the second huge climate party (photos on Facebook). As a token of thanks, the pupils between the ages of 6 and 16 were able to meet and extend an enthusiastic welcome to their shining example, project patron and Solar Impulse pilot Bertrand Piccard, in the Umwelt Arena near Zurich (YouTube video).