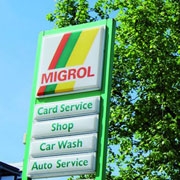 Migrol AG is actively working to reduce its CO₂ emissions. As part of the myclimate programme for the transport industry, Migrol has had myclimate carry out a carbon footprint for the second time. The analysis covered the offices and Migrol petrol stations as well as transportation. The latter was identified as the most important source of emissions caused by corporate activities. Since Migrol does not dispose of an own vehicle fleet, but carries out its transportation by subcontractors, these are actively involved into the project. They do not only deliver data about the consumption of their vehicles, but – in the context of fleet analysis – also data about the vehicles themselves. These comprise e.g. the age and the emission standard of the vehicles as well as measures taken by subcontractors in order to reduce consumption.  Such measures comprise e.g. aerodynamic packages, driver training or regular tyre pressure control.

Since generating the first carbon footprint, the average consumption of lorries as well as energy consumption at the Migrol headquarters in Zurich have been reduced.