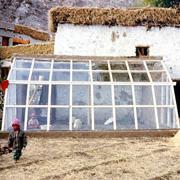 The world’s leading green energy Awards scheme announced that French charity GERES (Groupe Energies Renouvelable Environnement et Solidarités), working in the Himalayan region of Ladakh in India, is chosen as finalists for the Ashden Awards for Sustainable Energy 2009.  The Ashden Awards for Sustainable Energy were founded in 2001 to encourage the greater use of local sustainable energy to address climate change and alleviate poverty. myclimate supports the project through the CO₂ compensation mechanism, which enabled the construction of 500 hothouses as well as 20 small water power plants. Besides the reduction of carbon dioxide, Vincent Stauffer, leader of the GERES project in Ladakh, tells of the benefits brought by the project: “Greenhouse owners eat eight times more vegetables than they did previously and their incomes have increased by around 30%. Their extended families, neighbours and other villagers also benefit from buying and exchanging vegetables and flowers. This is leading to better nutrition and health benefits for over 50,000 people – a quarter of the local population.”