At ITB 2018, myclimate presented awards to three pioneering businesses. The climate protection organisation from Switzerland thereby honours sustainable yet commercially successful offerings in the tourism sector, with the 2018 winners being Kontiki Reisen, the Schifffahrtsgesellschaft Vierwaldstättersee and TUI Cruises. Before the presentation of the awards, a panel comprising moderator Fritz Lietsch, who is Editor-in-Chief of the Forum Nachhaltig Wirtschaften, Dr Anton Espira, who is Field Director of Eco2Librium and myclimate project partner in Kenya, and myclimate Germany’s Managing Director Stefan Baumeister discussed the numerous positive effects of efficient cooking facilities and the important role of tourism operators and customers in the dissemination of these technologies. 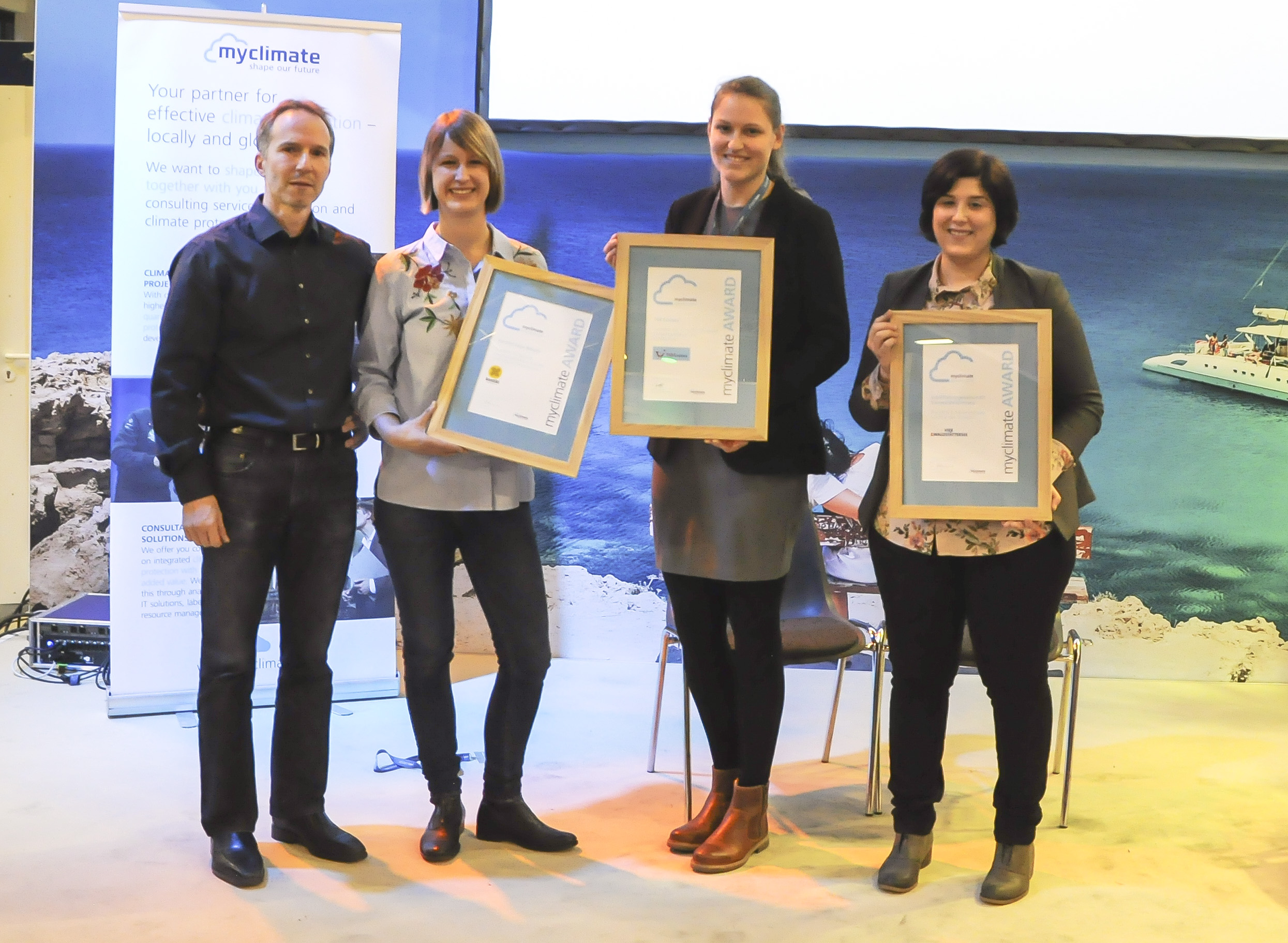 Kontiki Reisen from Baden specialises in travel in the Nordic countries and is part of DER Touristik Suisse AG. Over the last few years the company has reinforced its commitment to climate protection, compensating for all of its own business trips in the project “Clean drinking water for schools and households” in Uganda. Kontiki customers are also given the opportunity to compensate for emissions resulting from their own travel as part of this project. Thanks to much awareness-raising among employees and good incorporation into the booking process, Kontiki has been able to bring ever more customers on board for voluntary climate protection over the last few years. Kontiki Reisen was presented with the myclimate award for “Compensation of customer flights and business travel”.

The accolade of “Cruise pioneer for sustainability and climate protection” went to TUI Cruises. The company boasts a broadly based sustainability strategy, applying measures to reduce CO₂ emissions as much as possible both on land and on the water. At the same time, TUI Cruises compensates for its own emissions resulting from business travel or the production of printed materials. Customers are also offered the opportunity to calculate and compensate for their own cruise emissions as well as those of their flights.

In May the new, modern pleasure cruiser  "MS Diamant" was officially launched. The youngest member in the Schifffahrtsgesellschaft Vierwaldstättersee (SGV AG) fleet boasts cutting-edge technology, low levels of consumption and high levels of efficiency. Nevertheless, the tourism company from central Switzerland is deliberately going one step further: it has calculated the complete carbon footprint of “MS Diamant” with the help of myclimate and is compensating for this. Stefan Baumeister presented the Schifffahrtsgesellschaft Vierwaldstättersee with the myclimate award for “Pioneer – first climate-neutral ship in Switzerland”.

Before the award presentations, moderator Fritz Lietsch was joined by Stefan Baumeister and Dr Anton Espira to present a successful project. "Less deforestation of the rainforest thanks to efficient stoves" is the name of the project set up by Kenyan organisation Eco2Librium in 2010, which saves more than just CO₂ emissions. The about 40,000 efficient cookers that have now been installed also protect the biodiversity paradise that is the Kakamega rainforest. At the same time, the project has created hundreds of jobs and has a positive influence on health, particularly that of women and children. The project is so widespread partly thanks to the involvement of various tourism businesses and many private travellers. The discussion and award ceremony took place on the Thursday of the trade show at 4:45 p.m. on the ITB Adventure Stage in hall 4.1 in Berlin.

The discussion and award ceremony took place on the Thursday of the trade show at 4:45 p.m. on the ITB Adventure Stage in hall 4.1 in Berlin.