A Swiss family has sailed the world's oceans and set out to conquer the highest peaks and in the process is getting school kids interested in climate protection. What sounds fascinating is now also the subject of an exciting new film. Why not take a look Dario Schwörer's new film before immersing yourself in the world of ToptoTop. 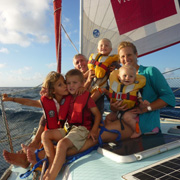 ToptoTop: A Swiss family has set itself the daunting challenge of sailing the seven seas and conquering the highest peak on all of the world's continents; without high-tech support, but climate neutrally using muscle power and renewable energy sources. After their epic seven-year journey, the Schwörers - Dario and Sabine and their four children Salina, Andri, Noé and Alegra, all born during the trip - have now reached the southern coast of Alaska. In his new short film on the Columbia Glacier, Dario Schwörer, geographer and glaciologist, shows the consequences of climate change and thus the inspiration for the project.

Dario and Sabine Schwörer are avid outdoor enthusiasts who want to do something for the natural environment they love. But ToptoTop is far more than a mere sporting challenge. The Schwörer family has meanwhile visited more than 50 countries and has met more than 50,000 school children; they have inspired them with their project, shown them examples of climate protection and actively engaged in climate protection, for instance through rubbish collection campaigns.

This element has become increasingly important to Dario Schwörer: "Children are a lot more creative than adults when it comes to new solutions. And they are rearing to go, when it comes to implementing these."*

myclimate Chief Executive Officer René Estermann met the Schwörers at the climate conference in Durban in 2011. Since then, myclimate has been among the supporters of this fascinating project. Dario Schwörer will spend the last few weeks of the year on "home leave" in Switzerland. He is only too happy to share his experiences and well-founded expertise. Are you still looking for a programme highlight for your Christmas dinner or an expert for your event? If so, contact us and we will be happy to put you into contact with him. It's worth it.