Fourteen years after the last national camp, 30,000 scouts gathered in Upper Valais this summer to spend two eventful weeks together in a spectacular landscape. Thanks to the implementation of a comprehensive environment strategy, negative impacts were minimised and many positive traces left behind – a result the organisers achieved with the support of myclimate. Those responsible – who were mostly volunteers – can look back on a successful event and be pleased that many sustainability measures could be implemented efficiently and effectively. 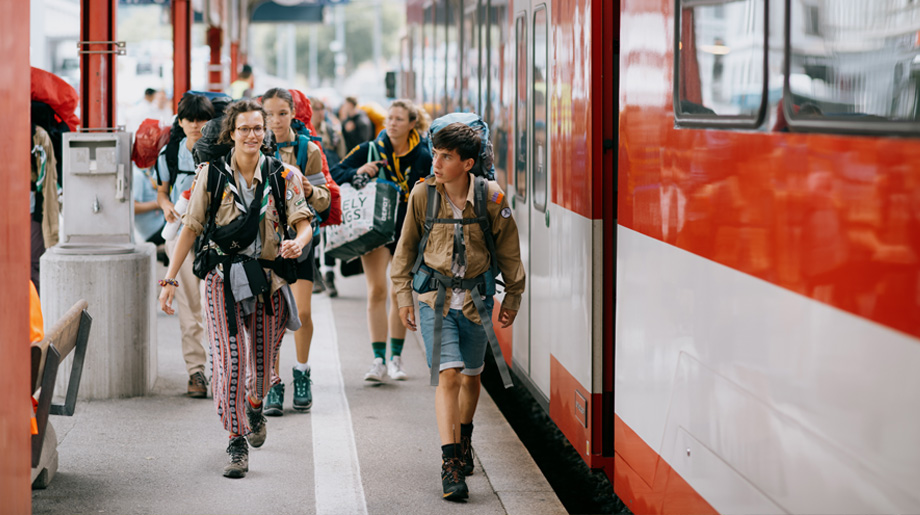 Brimming with enthusiasm: When you look at the photos and videos (interview below) taken by the organisers of the national camp (the “Bundeslager”, or “BuLa”) of the Swiss scout movement, you are immediately struck by the sparkle in the eyes of participants and organisers alike. Around 500 scouts have been working voluntarily for several years to make the national camp a highlight for all those taking part, whereby great emphasis was placed on environmental protection and sustainability, in keeping with the values of the scout movement.

The efforts towards sustainability were focused on four key themes:

Through targeted communication, the leaders and participants of the approximately 800 scout groups were actively involved in the environmental efforts from the planning through to implementation of the camp. In this way, the “negative traces” of the BuLa could be reduced to a minimum: The local nature remained intact after the event, a lot of materials could be recycled, and there was relatively little waste given the size of the BuLa tent city.

In showing that and how it is possible to host large-scale events sustainably, the scouts in Obergoms also left behind many “positive traces”. In their own camp media, which included a newspaper, radio, app and audioguide, the participants and visitors could learn about the efforts made towards a sustainable BuLa and how they themselves could contribute to them. In the programme activities on the campsite and in excursions, the participants addressed environmental issues “in scout style”, meaning interactively and with motivation and a focus on solutions. Ultimately, the BuLa as a whole can serve as an example for sustainable large-scale events both inside and outside the scout movement.

myclimate reviewed and guided the sustainability strategy that the BuLa organisers came up with, and its “Cause We Care” programme enabled participants and visitors to make an additional contribution when they purchased merchandise items or food and beverages. Contributions to “Cause We Care” also came from partners like Swiss Post, the CSS and the Lions Club. These contributions not only helped to fund the BuLa’s sustainability measures, but also went towards global carbon offset projects to significantly reduce CO2. The myclimate education experts were also active on site, hosting interactive workshops in which more than 700 children and young people addressed the themes of climate change and climate protection.