Amidst multiple global crises and a controversial lead-up to COP27, myclimate sent a team of climate experts to Egypt to observe negotiations, events and decisions in Sharm el-Sheikh. In this analysis, they share their views on the achievements and challenges of COP27. Progress was made mainly on one important topic, with the historic decision to establish a fund on loss and damage, but many critical issues were deferred to next year and there were no new major commitments to reduce global emissions. A new fund for loss and damage was agreed, which aims to provide funds to countries affected by climate change to help them deal with the damage incurred. Specific funding arrangements are yet to be determined. Our key takeaways: 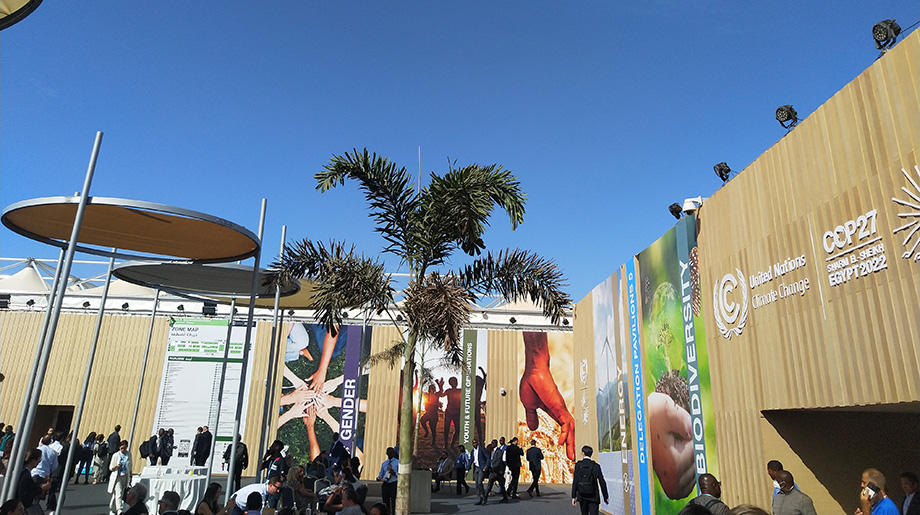 The 27th Conference of Parties (COP) of the United Nations Framework Convention on Climate Change (UNFCCC) was controversial before it even started. Hosted by the Egyptian Government in Sharm el-Sheikh, between the desert of the Sinai Peninsula and the shores of the Red Sea, the run-up to the conference was marred by concerns about human rights, questionable sponsors, unclear expectations and a slogan that switched from “African COP” to “Together for Implementation”. The conference was set in the midst of historic geopolitical tensions, energy and food crises, widespread natural disasters as well as economic recession and inflation. But climate change concerns us all and COP27 saw record numbers of delegates in attendance (estimates ranged from 30,000 to 45,000), countless events and vibrant pavilions showcasing solutions to climate adaptation and mitigation. It’s impossible to take it all in at the same time: to observe the negotiations between government parties, follow official side events, attend discussions and panels at the pavilions, and visit the Green Zone. The overall outcome of COP27 was a mixed bag and lagged far behind what is needed to prevent catastrophic global warming. Here’s a snapshot of what was decided – and what wasn’t:

While COP27 was supposed to focus on implementation, few of the events in Sharm el-Sheikh had the sense of urgency required to really get things moving on climate commitments. That said, there was passion in the debate around loss and damage from the very start. Stakeholders from Caribbean and African nations made it clear that they were angry – and rightfully so: Countries that contributed almost nothing to global warming have been bearing the brunt of climate change through repeated natural disasters. Their calls for compensation have fallen on deaf ears among western nations for 30 years, when the topic was first raised at the Rio Earth Summit. COP27 ended with a breakthrough commitment to establish a new loss and damage fund for vulnerable countries. Historic as it was, the decision was also last-minute, and negotiations ran over by two days. An agreement was reached after the European Union and other industrialised countries gave in, but the new fund’s significance remains to be seen, with many open questions regarding funding amounts, donors and procedures. As a next step, a transition committee will be set up to give recommendations on funding, payers and recipients. There was some debate about contributions from China and other BRICS countries that are not considered developed countries under UNFCCC, but have produced a significant share of global emissions since 1992. In the end, contributions from these countries to the fund were invited on a voluntary basis.

Unfortunately, the new loss and damage fund does nothing to reduce global emissions, and no progress was made in this regard compared to COP26. While the final cover decision of Sharm el-Sheikh still mentions the 1.5C goal and didn’t explicitly backslide on any pledges made in Glasgow, it also includes a new reference to “low-emission energy”. Some fear that this could be taken to mean gas, thus locking in the continued use of a fossil fuel and putting further obstacles in the way of keeping 1.5C alive. The record number of COP27 attendees from the oil and gas industry, including in country delegations, was subject to controversy both during and after the conference. Some argue that they played a role in preventing a fossil fuel phase-out from entering the final cover decision, whereas others point out the importance of having stakeholders from all sectors and industries at the table.

Nonetheless, progress was made on the Global Goal for Adaptation, for which a work programme is set to be finalised in 2023 as was planned in Glasgow. However, there was no increase in ambition in Nationally Determined Contributions (NDCs) or the Mitigation Work Programme, which was a target of the Egyptian COP Presidency and will likely only be finalised in 2026 – much too late to make a meaningful contribution to limiting global emissions to 1.5C. From a financial perspective, a new Collective Quantified Goal on Finance is set to be established in 2024, as was stipulated in the Paris Agreement. This will set a new global funding target, from the original climate finance goal of US$100 billion per year, and take into account the needs and priorities of developing countries. Access to climate finance and investments for developing countries was widely debated at COP27, but with few concrete solutions to improve existing financing instruments.

Negotiations around Article 6 of the Paris Agreement, which regulates carbon markets, regularly stalled over the course of the two conference weeks, demonstrating both a lack of alignment between parties and the difficulties of operationalising rules agreed on paper. Controversial issues regarding Article 6.2, which regulates bilateral cooperation on climate mitigation, included the authorisation of Internationally Transferred Mitigation Outcomes (ITMOs) and whether or not host countries should be allowed to revoke or change these. Positions among different countries diverged so significantly that all references to the revocation were taken out of the final text and the matter will be discussed again next year. While this doesn’t solve the problem, it doesn’t prevent progress in the operationalisation of Article 6.2 either. However, the initiative taken by governments is limited so far, both on the buyer and the seller side. Only four potential buyer countries have signed bilateral agreements with host countries for the anticipated transfer of ITMOs under Article 6.2: Switzerland, Japan, Singapore and South Korea, and some 11 countries plan on selling ITMOs. As the rules and regulations are ironed out over the coming years, these countries are already ‘learning by doing’ and will be able to share important lessons to help clarify the process.

As for Article 6.4, which regulates the multilateral carbon trading mechanism under the Paris Agreement, two central questions were discussed: the process for transferring certified emission reductions (CERs) from the UN’s Clean Development Mechanism (CDM) to the new 6.4 mechanism, and what to do with emission reductions (ERs) that haven’t been authorised for international transfer. While the final drafts answered some of these questions, albeit tentatively, there is a long list of items that will have to be debated again at COP28. This may sound discouraging, but it is important to remember that carbon markets themselves are buzzing. Despite the regulatory limbo, there are so many initiatives that it is hard to keep track. As many delegates pointed out, the carbon market is doing just fine without the technical details and every additional climate mitigation project helps reduce global emissions.

Outside the negotiating rooms, a plethora of topics was discussed. They are far too many to mention them all, but here are a few that sparked our interest:

Life in the desert

When the future of the planet is at stake, day-to-day inconveniences seem trivial, but as Albert Einstein said, “an empty stomach is not a good political advisor”. We won’t go into detail about the well-documented food and water shortages at COP27, but these certainly didn’t help the general mood and were reflective of wider logistical challenges in Sharm el-Sheikh. Distances to and within the conference venue were long and confusing, conference halls were kept at frigid temperatures by giant air conditioning units, and security arrangements resulted in suppression of protests and surveillance of delegates. None of this reflected well on Egypt’s COP Presidency and was jarring at a global conference known for lively civil society engagement. Local hotels were still trying to maximise profits from COP27 guests, making attendance prohibitively expensive for many NGO observers and delegations from low-income countries. Our own apartment, booked in January, was cancelled a month before the COP, only to become available again at three times the price. In spite of the challenges, many activists stayed behind for the final negotiations and thus played a part in pushing delegates to reach an agreement. The way that Egypt handled COP27 is an important reminder that host country conditions do matter at a climate conference: discussing sustainability in an artificial city in the desert seems bizarre; talking about climate justice in a country where activists are harassed and persecuted is highly problematic.

See you in Dubai…?

The new fund for loss and damage is truly a historic development and might help future cooperation on climate commitments with nations that have previously felt unheard by rich countries. At the same time, COP27 did not raise the bar on global climate action and the fight to keep 1.5C alive is getting more desperate by the minute. COP28 will be held in Dubai and has been labelled as a Global Stocktake. Clearly, more action will be needed if we want to have something to show for ourselves when we go back to the desert next year.