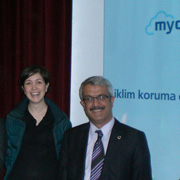 The education project was launched jointly with The Center for Environment, Energy and Sustainability Studies of Istanbul Bilgi University, which has been committed both to the United Nations Global Compact (UNGC) initiative and to its working group, the Principles for Responsible Business Education (PRME) since June 2009.

The aim of the education project is to increase environmental awareness and promote low carbon society in Turkey especially among housewives and primary school students. In order to reach this goal three different modules are prepared and presented to more than 500 partcipants. Primary school teachers and the teachers from public education centers are also included as a separate group for ensuring the continuity of the project.

The education project will be implemented around Turkey particularly in Southeastern and Eastern Anatolian cities. The first training was given at Kilis, located in the border of Syria, at 14-15 April by the help and support of Kilis Governor's Office. Besides helping to organize the groups, Kilis Governor's Office also supported the project by sponsoring the educators.