Big mountain runs, park action, helicopters and powder, powder, powder. Snowboard and ski films can be fascinating, but after a while they all tend to blend into one another. STEPS is different, which explains the great success of its premiere tour in November in Swiss cinemas. 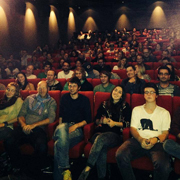 Packed lobbies, long waiting lists, and cinemas reminiscent of overcrowded universities: The Swiss tour of STEPS, the first climate neutrally produced snowboard and ski film, was a huge success. On three evenings in November, roughly 1,000 snow afficionados watched this film from the Ride Greener initiative and the film crew from Coupdoeil.

Those who couldn’t make it to the tour will have the opportunity to enjoy STEPS on the big screen as part of its on-going presentation. The filmmakers are also hard at work producing DVDs with the support of the wemakeit community. Powder fans from Germany, Austria and other countries can find out about additional showings on the STEPS website. In store is spectacular ski footage, along with climate-related information that will give viewers something to think about. The film is subtitled in English for viewers without specific knowledge of "Berne" or "Walliser" German.

The highlight of the Swiss film tour was the panel discussion lead by the film's protagonists, which took place after every showing. In addition to Sten Smola, the head of Ride Greener, and the production crew, myclimate CEO René Estermann responded to questions from the moderator and the audience.

If you would like the film for your own DVD collection, write us a short message. We have a few copies for friends of the foundation.