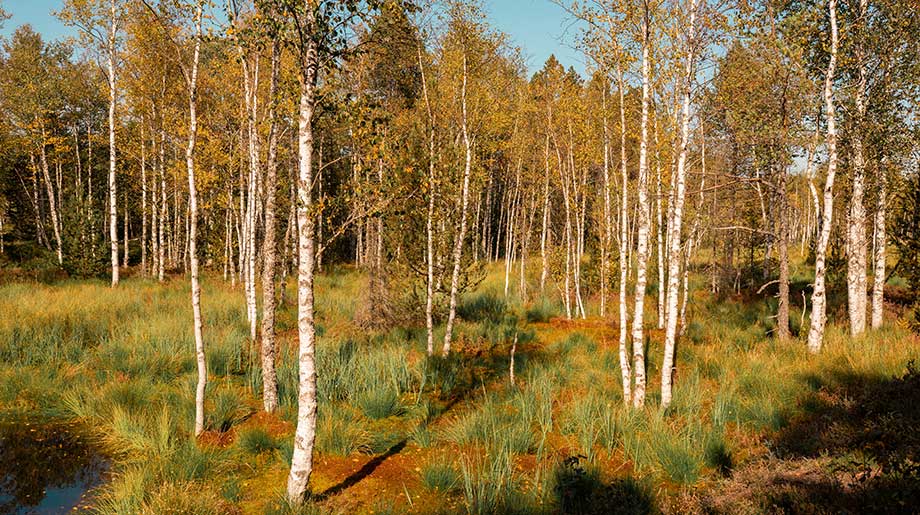 In their natural state, moors have enormous carbon storage potential. Globally, moors store 30 per cent of soil carbon, despite the fact that they cover only three per cent of the world’s surface. In the past, many of Switzerland’s moors were dried out using drainage ditches so that people could use the land for agriculture or harvest peat. Although they have been protected since the Rothenthurm Initiative in 1987, two thirds of the country’s moors, which number over 500, are still in their drained state due to a lack of money. As a result, CO2 continually passes into the atmosphere. Only rewetting guarantees that a drained moor is restored as a long-term store of CO2.

The upland moor in Sous-Martel-Dernier is one of the largest areas of natural moorland in Switzerland. The moor in Sous-​Martel-Dernier in the canton of Neuchâtel – a moorland of national importance – was renaturated. The land restoration efforts of 2019 are showing the first signs of success in 2022: Peat moss and other moor-specific plants are inhabiting and overgrowing the moor. Numerous types of dragonfly are also finding a home in this area again. The carbon offset project closed the funding gap and was therefore of key importance for this renaturalisation project, which was conducted by the canton of Neuchâtel. The project is co-financed by federal contributions.

On drained moorland, oxygen penetrates into the soil and converts the bound carbon in the peat soil into CO2, which then escapes into the atmosphere. To rewet moorland, the drainage ditches must be closed off structurally. As soon as the moor returns to its natural intact state, the high water level inhibits the decomposition of the organic material in which large amounts of CO2 are permanently stored. The carbon offset project is made possible thanks to a new methodology used by the Swiss Federal Research Institute WSL, which estimates the amount of CO2 emissions that are avoided as a result of rewetting. According to this approach, the top 50 cm of renaturalised moorland will bind the emissions of 925 tonnes of CO2 per hectare over the next 50 to 100 years.

1.8 hectares were rewetted and provide a valuable habitat for rare animal and plant species.