Restoration of peatland in the state forest Teufimatt 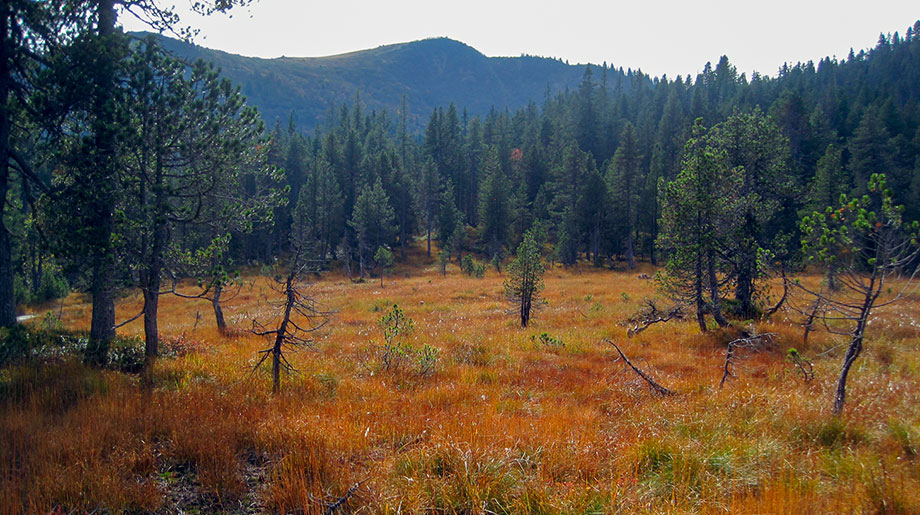 Thanks to this project, various raised bog areas in the state forest Teufimatt from the canton Lucerne can be restored to its natural state, resulting in the release of less greenhouse gas into the atmosphere. But climate protection is not the only advantage of rewetting this moorland; it also benefits biodiversity, the water balance and the local construction industry.

In their natural state, raised bogs have enormous carbon storage potential. Globally, peatlands store 30 per cent of soil carbon, despite the fact that they cover only three per cent of the world’s surface. In the past, many of Switzerland’s peatlands were dried out using drainage ditches in order to use the land for agriculture or to remove peat. Although they have been protected since the Rothenthurm Initiative in 1987, two thirds of Switzerland’s over 500 raised bogs are still in their drained state due to a lack of money. Carbon dioxide is released into the atmosphere continuously. Rewetting is the only thing that guarantees that a drained peatland once again becomes a long-term carbon storage facility.

The raised bog areas in the canton of Lucerne are located in the Teufimatt state forest, which was declared a special forest reserve in 2008. Since then, nature conservation goals have been pursued in management, including the regeneration of drained former raised bogs and the promotion of capercaillie habitat. Despite legal protection, the peatlands are still in a drained state due to lack of funding. The climate protection project closes this financing gap and is thus co-decisive for the renaturation project. The project is co-financed by cantonal (Lucerne) and federal contributions. The renaturation work will be carried out in 2021.

When a moor has been drained, oxygen penetrates into the soil and converts the carbon bound in the peat into carbon dioxide, which escapes into the atmosphere. To rewet a moor, the drainage ditches have to be blocked using construction measures. Once moorland has been returned to its natural, intact state, the high water level inhibits the decomposition of the organic material, in which large quantities of carbon are permanently stored. The climate protection project is possible thanks to a methodology developed by the Swiss Federal Institute for Forest, Snow and Landscape Research (WSL), which estimates the volume of CO₂ emissions that are avoided thanks to rewetting. According to this approach, the top 50 cm of the peat bind potential emissions of over 1,000 tonnes of carbon dioxide per hectare for the next 50 to 100 years.

Moors are not protected for nothing. They are hotspots of biodiversity. Intact moors oﬀer habitats for rare or even endangered species of animals and plants. Renaturation also improves ﬂood protection, water pollution control, the microclimate and the landscape. It oﬀers the local population a place for recreation. The money for restoring the moor mostly ﬂows into regional trade and industry.

2.55 hectares are going to be rewetted and provide a valuable habitat for rare animal and plant species.