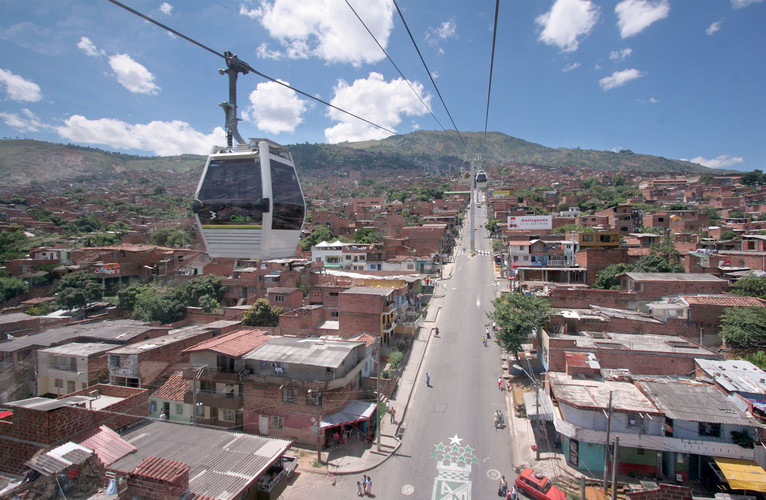 Six cable car lines are currently operational or under construction in the city of Medellin, Colombia. The safe, environmentally friendly and convenient new public transport system reduces CO₂ and other greenhouse gases and improves the air quality of the city.

The inhabitants of Medellin have been using since long old crowded buses, cars or taxis to get to their workplace. The new established cable car which is linked to the metro lines of Medellin substitutes to a certain extent these conventional modes of transport by a new innovative public transport system.

The cable car lines (three lines implemented by April 2015) are an integral part of the metro system of Medellin and provide for seamless transit. They conveniently connect the hilly areas of Medellin with the city center. The new public transportation system is not only faster, more reliable, and safer but also cheaper.. People living in the hilly areas of Medellin belong to the lowest income strata of the city and therefore a reduction of travel cost and travel time is highly appreciated.

All six lines are operated by Empresa de Transporte Masivo del Valle de Aburra Ltda. (ETMVA) the municipal Metro operator. The operation of cable cars as a mass transit mean is unique and innovative. Worldwide only very few cities operate comparable schemes and with much lower ridership than that experienced in Medellin.

CO₂ emission reduction calculations are based on comparing the emissions passengers would have caused using traditional versus the new transport mean. Emissions caused by electricity consumption of the cable car are thereby included as project emissions.

The project not only reduces CO₂ emissions but also contributes significantly to an improved air quality  as well as having numerous social benefits for system users as well as for inhabitants of the zone where the cable car has been installed including a dramatic decline of the crime rate due to accompanying measures of ETMVA.

And have a look at more pictures on myclimate-Facebook!

In its first monitoring report, the project has saved 16,330 tonnes of CO2.

Use of old buses, cars or taxis.
Download project PDF