Renaturation of Moorland in Schwändital 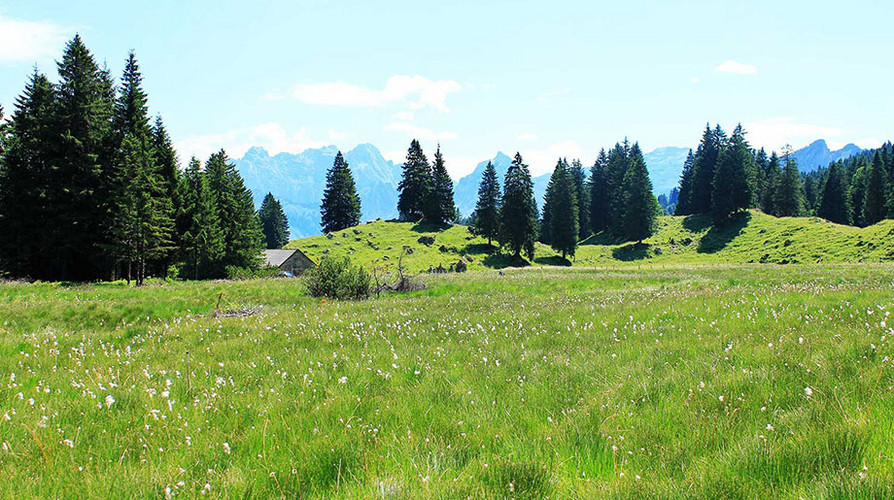 Thanks to this project, moorland in the Schwändital valley in Glarus can be restored to its natural state, resulting in the release of less greenhouse gas into the atmosphere. But climate protection is not the only advantage of rewetting this moorland; it also benefits biodiversity, the water balance and the local construction industry.

In their natural state, moors have enormous carbon storage potential. Globally, moors store 30 per cent of soil carbon, despite the fact that they cover only three per cent of the world’s surface. In the past, many of Switzerland’s moors were dried out using drainage ditches in order to use the land for agriculture or to remove peat. Although they have been protected since the Rothenthurm Initiative in 1987, two thirds of the country’s over 500 moors are still in their drained state due to a lack of money. Carbon dioxide is released into the atmosphere continuously. Rewetting is the only thing that guarantees that a drained moor once again becomes a long-term carbon storage facility.

The Gross Moos in Schwändital in the Canton of Glarus – a moor of national significance – has not yet been rewetted due to a lack of financial resources. The climate protection project fills this financing gap and is thus crucial for the restoration project. The owners of the renaturation project are the Alpkorporation Vorderschwändi and Hinterschwändi. The project is co-financed by federal and cantonal contributions (Glarus) and Pro Natura.

When a moor has been drained, oxygen penetrates into the soil and converts the carbon bound in the peat into carbon dioxide, which escapes into the atmosphere. To rewet a moor, the drainage ditches have to be blocked using construction measures. Once moorland has been returned to its natural, intact state, the high water level inhibits the decomposition of the organic material, in which large quantities of carbon are permanently stored. The climate protection project is possible thanks to a new methodology developed by the Swiss Federal Institute for Forest, Snow and Landscape Research, which estimates the volume of CO₂ emissions that are avoided thanks to rewetting. According to this approach, the top 50 cm of the peat bind potential emissions of over 1,000 tonnes of carbon dioxide per hectare for the next 50 to 100 years.

The tiny sphagnum moss plants with their enormous water storage capacity and ability to capture carbon dioxide from the atmosphere in the soil need to do us an important service in an era of global change. We would thus do well to ensure their survival now.

Moors are not protected for nothing. They are hotspots of biodiversity. Intact moors offer habitats for rare or even endangered species of animals and plants. Restoration also improves flood protection, water pollution control, the microclimate and the landscape. It offers the local population a place for recreation. The money for restoring the moor mostly flows into regional trade and industry.