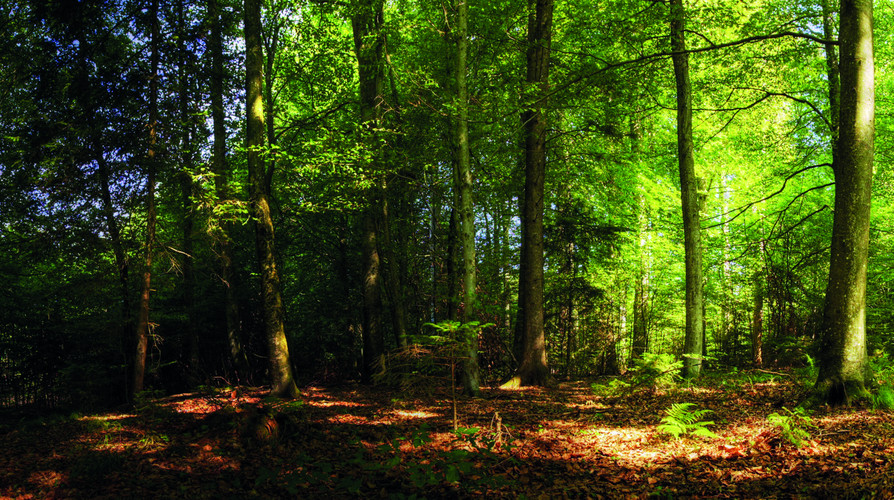 Through a reduction in the use of wood, forest management in a forested area of the canton of Solothurn is being optimised for the climate. CO₂ is thereby removed from the atmosphere over the long term while the forest becomes more resilient. In addition to this, as part of the project, targeted biodiversity measures enhance the habitat of weasels, amphibians, reptiles and dragonflies.

The forest is priceless. It supplies us with wood, a sustainable raw material, a renewable building material and a supplier of energy. The forest slows down flood crests and cleans and stores the water as ground water. Furthermore, the forest is the guardian of biodiversity; it provides a habitat for countless animals. Last but not least, it is a large carbon store. Trees remove carbon dioxide (CO2) from the atmosphere while they grow, and the carbon is stored in the biomass and the soil. This known as a CO₂ sink and it is an important pillar of local and international climate protection.

While in developing countries the focus is more on protecting the forest, the aim in Central Europe is to adapt forestry to climate change. Adaptation means, on the one hand, combining the use of the renewable raw material wood with carbon storage in a sensible way (less wood use) and, on the other hand, implementing concrete silvicultural measures. For example, the non-​native spruces in the midlands should be gradually replaced by trees which are more resistant to heat and drought, such as oak. Trees which are adapted to the climate live longer, thereby strengthening the forest as a whole, and continue to store carbon dioxide.

Until now, forest owners have not benefited from the value of this carbon sink service. This carbon offset project now compensates forest owners for their contribution to climate regulation and at the same time enables them to adapt their management to climate change. In other words, climate-optimised management ensures that the forest develops in a stable and vital way and that all the functions of the forest – protection, wood production, biodiversity, recreation and drinking water protection – are still fulfilled.

Partial reduction in utilisation of the managed forest

The Bucheggberg forest enterprise in the canton of Solothurn is adapting its management as follows. By using less wood over an area of 1,236 hectares, more tree biomass, i.e. more carbon, is left in the forest. The wood stock is increased to at least 340 m³/ha compared to the normal stock level of 280 m³/ha. Thanks to the partial reduction in the utilisation of the managed forest, the supply, and thus the carbon storage of the forest, is being increased and/or secured. This so-called biological sequestration of carbon thus makes a contribution to nationwide climate protection efforts.

Thanks to the project, the habitat of endangered species on the red list will be protected. Those on the list include the yellow-bellied toad, the midwife toad and the natterjack toad. Other target species and key species for nature conservation, such as the ermine, mouse weasel, sand lizard, grass snake and forest lizard also make their homes in Bucheggberg. Their populations should be preserved and encouraged to grow.

The income from the sale of CO₂ emission reduction certificates offsets the lost income from the use of wood and underpins the biodiversity support measures. This includes wildlife corridors, upgrading of forest borders and the creation of water habitats for amphibians. Because the federal government counts part of the sink effect of the Swiss forests towards its national climate balance in the scope of the Kyoto Protocol, each CO₂ certificate from this project is also deposited with a certificate in a small-scale farming family reforestation project run by myclimate in Nicaragua in order to avoid any double counting on the part of the state.

The project sustainably manages a forest area of 1,236 ha.

The project supports nine species that are either under threat or have been declared as target or key species in Switzerland with targeted measures.