The anthropogenic greenhouse effect is due to greenhouse gases emitted by humans, which amplify the natural greenhouse effect. This leads to global warming. This noticeable change in the climate has a significant impact on people and nature.

According to the sixth report of the Intergovernmental Panel on Climate Change (IPCC) on the scientific basis of climate change, “it is unequivocal that human influence has warmed the atmosphere, ocean and land.” Since the fifth report, there has been stronger evidence of extremes such as heat waves, heavy precipitation, droughts and tropical cyclones and of human influence on these events.

Natural greenhouse effect as the basis of life

Heat absorption, or the greenhouse effect, is a natural process. It is the basis for the development of life on our planet. Without the greenhouse effect, temperatures on our planet would be permanently below zero. In addition to the greenhouse effect, temperatures are also influenced by other natural processes, such as the varying activity of the sun. The position of the continents also has a direct effect on air and ocean circulation and thus on the global climate. In addition, volcanic eruptions release large quantities of CO2, but also aerosols, volcanic ash and dust particles, which can ultimately result in a temporary cooling of the global climate.

Anthropogenic greenhouse effect as a result of industrialisation

In addition to these natural developments, there is the anthropogenic greenhouse effect. The anthropogenic greenhouse effect results from human activity which causes additional emissions of greenhouse gases. The latter prevent more heat radiation from escaping the atmosphere than usual and are thus responsible for a sort of accumulation of heat. This development was caused by industrialisation and the associated burning of fossil energy sources such as coal, oil and natural gas, as well as by large-scale land use, such as the clearing of tropical rainforests. 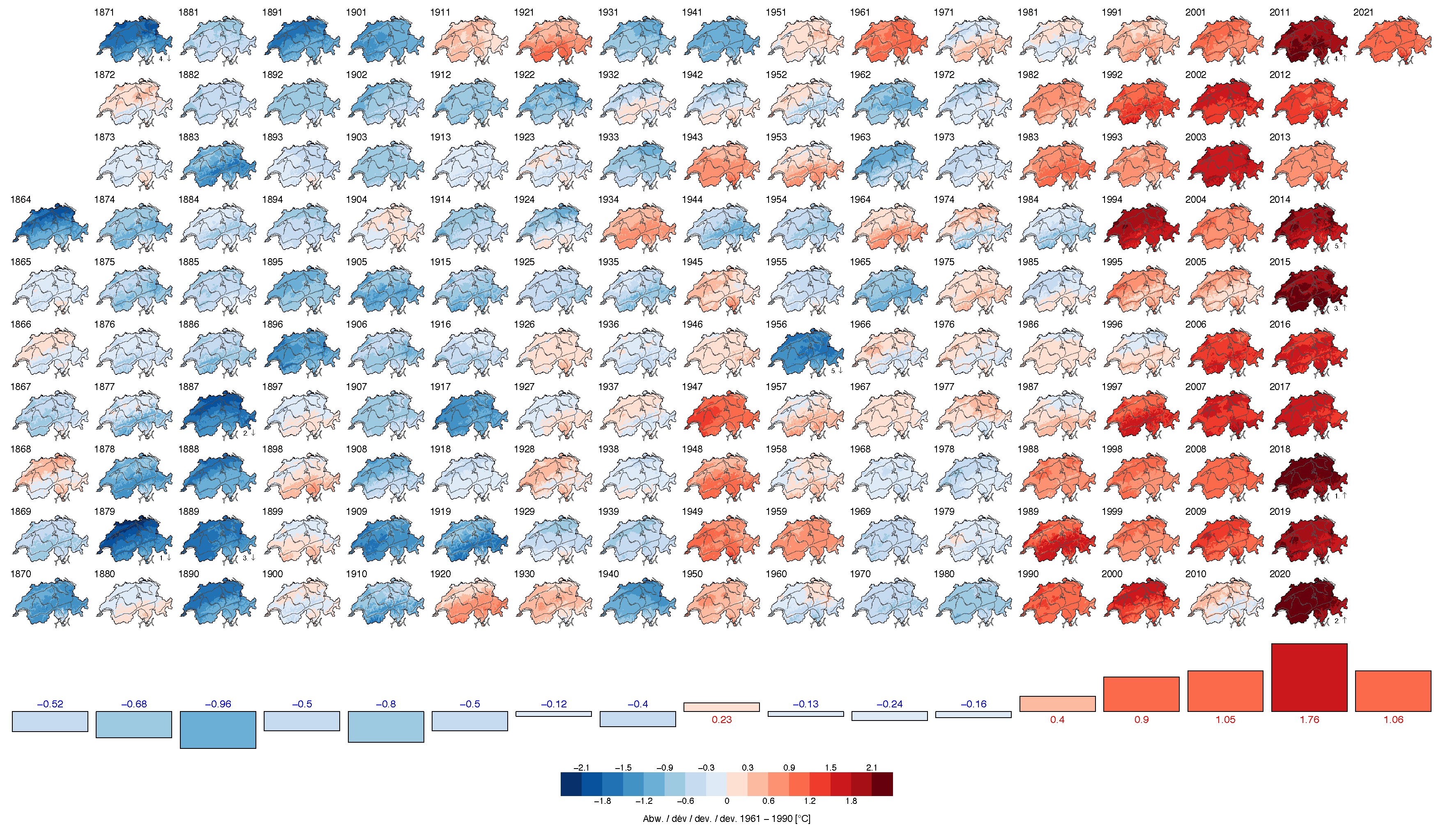 Global warming using the example of Switzerland. Cooler years are shown in blue, warmer years in red. Compared to the reference period 1961 to 1990. Source: MeteoSchweiz, 2022

Average global surface temperature has gone up by more than 1°C since industrialisation, an unusually rapid increase. Each of the past four decades has been warmer than all previous decades since 1850.

Besides carbon dioxide (CO2), there are other trace gases generated by humans that amplify the greenhouse effect, as the graph below shows: these include methane (CH4), but also nitrous oxide (N2O), known by the trivial name “laughing gas”, ozone (O3) and chlorofluorocarbons (CFCs).

Global climate records document significant increases in the concentration of the greenhouse gases CO2, CH4 and N2O since the beginning of the 19th century. Source: myclimate Climate Booklet, 2019

Atmospheric CO2 concentrations in 2019 were the highest in at least two million years, according to the Intergovernmental Panel on Climate Change. The amount of methane and nitrous oxide in the atmosphere was also at levels not seen for at least 800,000 years.

Global warming as a result of the anthropogenic greenhouse effect

Global warming is massively altering ecosystems, making the consequences of climate change serious for humans too. Rising air and sea temperatures are gradually reducing the entire global snow and ice mass. Glaciers and polar ice caps are melting. Sea levels are rising as a result, which is also due to the increase in the volume of water with higher temperatures. This leads to a risk of flooding and the disappearance of habitats. In addition, global warming increases the probability and intensity of extreme weather events such as storms, droughts and floods.

These direct results of climate change have consequences for people and nature, such as an increase in hunger and water crises, the loss of biodiversity, health risks due to extreme heat and climate refugees driven from their homes by all this.

Furthermore, climate change provokes irreversible events, also referred to as tipping points, such as the melting of polar ice caps, the disappearance of the Amazon rainforest, permafrost thawing and, last but not least, ocean acidification through the release of methane and carbon dioxide.

Back
myclimate uses cookies to provide you with the best possible service. If you would like to continue browsing, please agree to the use of cookies. Read the data protection provisions for more information.