Roger Schlammlawinski. "Hopp, hopp, mein Zebra läuft Galopp" ("Hop, hop, my zebra gallops off.") Tornado Barnetta. "Oh Mangobaum" ("Oh, mango tree"). Does that sound funny? Indeed it is, even though the theme of the new myclimate campaign is a rather serious one. 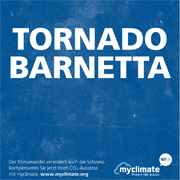 In time for the start of the 19th World Climate Conference in Warsaw, myclimate has launched a cross-media campaign for climate protection. Using the media of print, eBoard, radio and film, attention is drawn to climate change in a way that is humorous rather than alarmist. The subject of climate change thus eludes nothing and no one, whether it’s Swiss celebrities or traditional children’s songs.

The campaign’s motto is: "Climate change affects Switzerland too." In print and on eBoards, myclimate "climate changes" the names of Swiss celebrities to draw attention to the effects of climate change. Tranquillo Barnetta becomes a threatening tornado, and Rainer Maria Salzsee (Salt Lake) is sure to excite the attention of Swiss sports fans. The text adds appear in Freespace for 20 minutes.

Well-known Swiss children's songs with unexpected climate-related variations can be heard on the radio. In "Heile, heile Säge," for example, the rain finally stops after 15 days. And in "Hop, hop, hop", it’s a zebra that gallops rather than a pony. These are the songs of the "Schwiizergoofe", famous from the Children’s Music Project from Swiss hit producer Hitmill. The spots are being launched exclusively on Radio Zürisee.

For Christmas, myclimate carries this theme into the medium of film. Clients and friends can already enjoy an early digital Christmas post.

The campaign was designed and implemented pro bono by the agency KSP, based in Zurich.