Our customer Chocolats Halba works according to the philosophy "examine yourself, compare your performance with your competitors and strive to improve". This also applies to sustainability, an area in which they have been our partner since 2008. A partnership boasting tangible and considerable success. 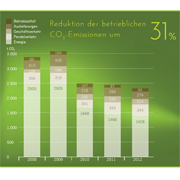 Chocolats Halba is among the premium manufacturers of chocolate specialities for retail and the processing industry. As a globally operating company with a corporate philosophy geared towards sustainability, Chocolats Halba attaches great importance to ensuring that all of the company's activities are environmentally compatible and benefit society as a whole. In line with this strategy, Chocolats Halba has meanwhile been working with myclimate for several years. The partnership started in 2008 with an in-depth analysis of their corporate carbon footprint.

The analysis revealed that Chocolats Halba emitted a total of 3'387 tonnes of CO₂ in 2008. Energy consumption, particularly for electricity and gas for heating purposes, was by far the biggest cause of these emissions. From that starting point the company's sustainability team developed a successful package of measures aimed at significantly cutting CO₂ emissions.

Mainly by switching from conventional electricity to hydroelectric power, Chocolats Halba was able to cut its CO₂ emissions by more than 30 percent. The company succeeded in reducing its carbon footprint per chocolate bar by more than half. The success of these measures was analysed by the myclimate CMS experts and subsequently approved.