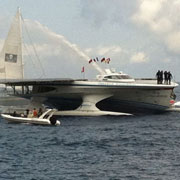 myclimate warmly congratulates his partner PlanetSolar on the first tour around the world using solar energy only. The MS TÛRANOR PlanetSolar crossed the finish line in Port Hercules of Monaco on Friday, 4 May 2012 after a journey of over 19 months and more than 60.000 kilometres. Nevertheless, the circumnavigation marks only the beginning for PlanetSolar: “The MS TÛRANOR PlanetSolar is much more than a ship. It has become an ambassador of solar energy” says Immo Ströher, main investor of the project. “The arrival in Monaco is only the start! We now have to take advantage of the fame of PlanetSolar in order to promote the use of solar energy.”

With the MS TÛRANOR, PlanetSolar wanted to demonstrate the potential and reliability of solar energy, a goal that was well achieved! During their circumnavigation, the crew of the MS TÛRANOR PlanetSolar made stopovers in 28 countries with the start and finish in Monaco. Over the weekend, several festivities were held with attending partners and guests such as myclimate, the Federal Council of Switzerland, Didier Burkhalter or His Serene Highness Prince Albert II of Monaco.

Thanks to its partnership with myclimate, the MS TÛRANOR PlanetSolar is completely climate neutral: emissions of the boat construction as well as internal emissions of the organisation are offset in myclimate climate protection projects.