What is going on? The association "Klima-Allianz" is appointing Doris Leuthard as patron saint of the climate and requesting her to stand up for a suitable climate policy. 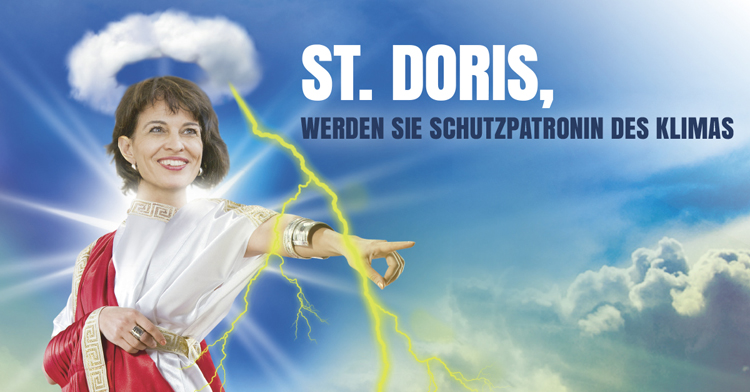 The Klima-Allianz association wanted to send out a strong signal to coincide with the UN Climate Summit in New York. A special appeal was being made to Minister of State Doris Leuthard, who represented Switzerland in the group of 120 heads of government.

Klima-Allianz is made up of myclimate and some 60 other organisations from the fields of environmental protection, development cooperation, politics, religion and union work. It works to ensure that Switzerland leads the way for climate protection and accepts its responsibility both at home and abroad. With a common voice, the organisations and signatories of the petition want to make Environment Minister Doris Leuthard into St Doris, patron saint of the climate. Against a serious backdrop, Klima-Allianz hopes to use this humorous and charming message to encourage Doris Leuthard to take an ambitious stance for the climate in New York and in Swiss politics.

Specifically, the text of the petition requires Switzerland to switch its energy supply entirely to renewable sources by 2050 and to set interim climate goals in advance of that. After all, all that has been achieved nationally to date is to ensure that the same amount of CO₂ enters the air today as it did in 1990.

But Klima-Allianz does not believe that climate protection should stop at the borders. For that reason, the petition also wants Switzerland to provide financial support to those developing countries that have contributed little to global warming but are suffering from it particularly severely. “Switzerland has all of the requirements and opportunities necessary to stand up for the climate locally and globally. We, the people of Switzerland, just need to have the desire and to express this desire openly. It is for this purpose that we are fully behind Klima-Allianz,” says myclimate Managing Director René Estermann.

Alongside other mobilisation activities the organisers of Klima-Allianz want to draw further attention to the important topic in the next few months. The Council of Ministers is set to make a preliminary decision about Swiss climate policy up to 2030 in November. All countries are to report their climate protection proposals to the UN by the end of March 2015. The conclusion of a global agreement is expected in Paris in December 2015.

Further information on the petition and St Doris can be found in the respective press releases (German, French and Italian).