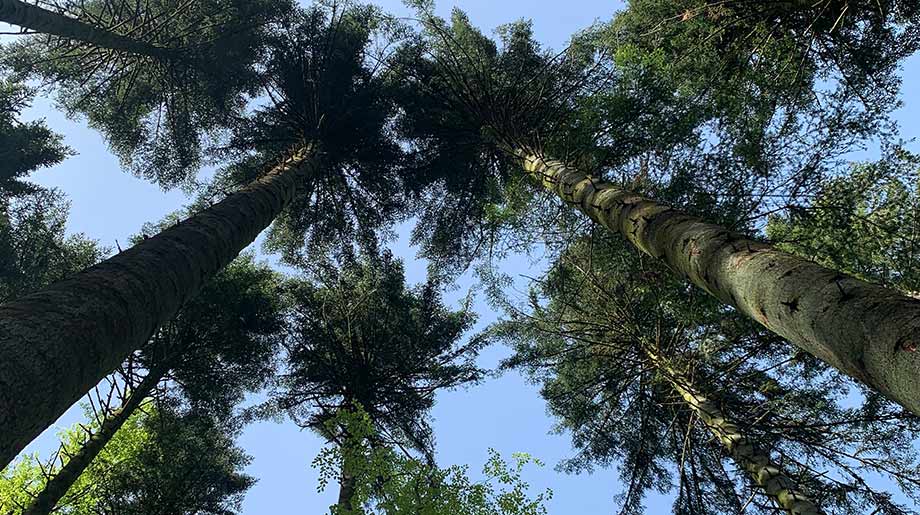 The forest carbon offset project in the Zofingen region of Switzerland provides for adapted management of the forest. A reduction in the use of timber means the forest is able to capture more CO2 and therefore store carbon in the biomass and in the soil. Climate-optimised forest management also helps to create a more attractive habitat for various creatures and improve the role of the forest as a contaminant filter for groundwater.

Forests are priceless ecosystems. They are an essential component in the fight against climate change, as they capture the greenhouse gas carbon dioxide (CO2) and produce oxygen at the same time. Forests also serve as recreation areas for people, provide habitats for many animals and plant species, act as a water store, and produce wood – an important renewable and climate-friendly building material and fuel.

While, in developing countries, the focus tends to be more on protecting the forest, industrialised nations are aiming to adapt the forestry industry to climate change. Adaptation means, on the one hand, expediently combining use of wood as a renewable material with carbon storage (less use of timber), and carrying out specific silvicultural management measures on the other. The project in the Zofingen region pursues precisely this approach.

Climate protection thanks to carbon capture in the Zofingen forest

This carbon offset project covers an area of around 1,663 hectares of forest in the border regions of the Aargau, Bern, Lucerne and Solothurn cantons. The forest is currently being actively managed and used for a variety of purposes, and in future the forest will continue to be managed by the regional forest enterprise, but activity will be reduced to allow larger wood reserves to accrue. The increase in wood reserves should capture up to 3553 tonnes of CO2 from the atmosphere annually. Over the 30-year total duration of the project, this equates to an emissions reduction of up to 106,604 tonnes of CO2.

As a result of the current management of the area, the wood reserves amount to around 328 cubic metres per hectare, which means that the forest is unable to fully reach its potential as a carbon sink. The adapted management should in future allow the creation of a forest that has wood reserves of over 350 cubic metres per hectare. The Aargau forestry department regularly checks the use of the forest throughout the duration of the project.

This carbon sink function – that is the storage of carbon in the forest's biomass (trunks and branches) and in the soil – is also described as a nature-based solution, meaning the use of a natural process as a solution to counter global warming. This so-called carbon dioxide removal is an important process in reaching the negative emissions that are urgently needed to achieve the Paris climate goals.

Not only will this area of forest capture more carbon dioxide in future, it will also be more resilient in the face of changes caused by climate change, thanks to the offsetting of the forest's climate protection performance with income from the sale of the CO2 certificates. This not only allows the lost income from the use of timber to be partly compensated for, but also permits the financing of measures for climate adaptation and promotion of biodiversity:

Climate change is having an increasingly noticeable impact on the forest, in particular as a result of rising temperatures, lower summer rainfall and increasingly evident disruptive events. To ensure that the benefits of the forest continue to be guaranteed in the future, this project supports the adaptation of this piece of forest, for example by introducing and promoting climate-adapted tree species or increasing the resistance and resilience of forest stocks. Hence, tree species that are more climate-adapted and therefore more resistant to drought, such as the sweet chestnut, are reforested in places where storm Burglind wreaked major damage in 2018.

The biodiversity of fauna will also be protected and promoted as a result of the project, thanks to both careful forest management and targeted assistance measures. In ponds, pools and pits, for example, habitats for valuable species such as the yellow-bellied toad, midwife toad, common toad or newt can be protected and preserved.

The project sustainably manages an area of over 1,663 hectares of forest.