Renaturation of the Gelliner Bruch in Mecklenburg-Western Pomerania 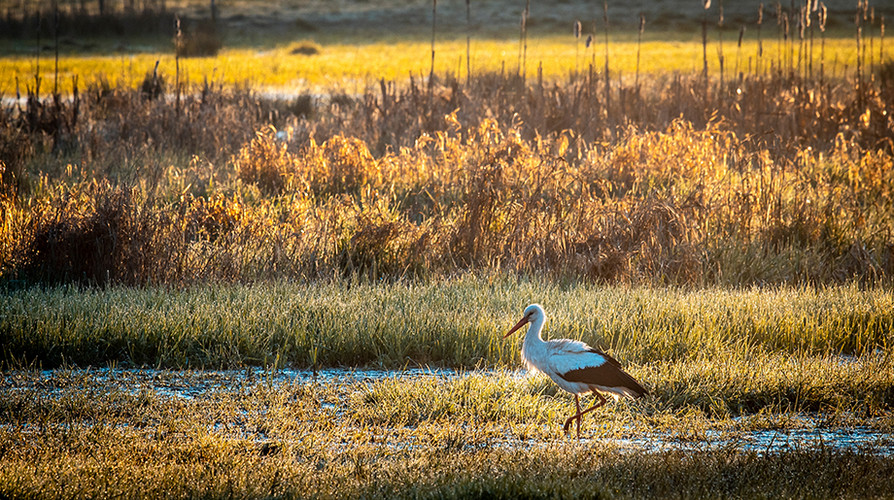 Project location: Ramin district, not far from the German-Polish border

Thanks to this carbon offset project, the Gelliner Bruch moorland in Mecklenburg-Western Pomerania can be restored to its natural state. This will result in a significant decrease in the quantity of greenhouse gases emitted into the atmosphere. However, it's not just the climate that will benefit but biodiversity, too, especially the local bird-life, since marsh and wetlands are crucial areas for them to shelter and breed in.

In their natural state, moors have enormous carbon storage potential. During the last century, 95 per cent of the moorland in Germany was made "arable" for peat extraction, agriculture and forestry, meaning that it was drained using a system of canals and ditches. "Dead" moorland, i.e. drained, dry moorland soil, emits huge quantities of greenhouse gases, because the carbon reserves are laid bare, oxidised and released into the atmosphere continuously and on a large scale. With more than 40 million tonnes of CO2 emitted annually, drained moorland soil accounts for 40 per cent of all agricultural greenhouse gas emissions in Germany. Rewetting moors is therefore an important local contribution to global climate protection.

An under-appreciated climate protector: The moor

Well into the 1970s, the thickness of the peat mass in the north-eastern part of the Gelliner Bruch measured up to seven metres. Moors form over millennia from the remnants of dead plants, which do not completely decompose as a consequence of oxygen deprivation. This results in the continuous formation of peat – on average, the peat mass grows about 1mm per year, this means that in the case of the Gelliner Bruch it has been growing for more than 7,000 years! This changed in the 1970s, when the Gelliner Bruch was drained using pumps and ditches and intensively farmed for use as pasture.

The rewetting of moorlands is an indispensable component of achieving the climate goals set out in the Paris Agreement. Global climate neutrality by 2050 means that in around 30 years as many moors as possible must be rewetted.

As a consequence of the draining, the peat mass was decimated and the moor's soil bed sunk. The rewetting project saw pumps decommissioned, drainage ditches filled and old water inflows restored. Thanks to the carbon offset project, the advancing peat extraction was halted so that the peat layer of the Gelliner Bruch could become a store of carbon once again and no longer a source of greenhouse gases.

As a water-rich ecosystem, moors play an important role as the habitat and shelters of many specialised plant and animal species. Many bird species such as herons, cranes, greylag geese, sandpipers and common snipes depend on intact moorland as places to rest and breed. Here they can also find adequate nourishment before they move on to their winter habitats. Moorland is also invaluable for the water supply, i.e. for flood protection and water pollution control. The mass of peat found in moors is able to absorb water very quickly, e.g. in the event of heavy rain, and gradually release this into the surrounding landscape, e.g. in dry periods. Intact moors are also an important filter for nitrogen and nitrate pollution from agricultural processes and thus ensure the water in rivers, lakes and seas is kept clean.

Implementation of the project

By obtaining MoorFutures® certificates, private individuals, companies and institutions can contribute to the financing of the project. In total some 6.7 hectares of moorland have been conserved and their peat masses prevented from disappearing. MoorFutures® were established as the world's first carbon certificate for rewetting moorland in 2012. The benchmark and approach of the MoorFutures projects are regulated by the MoorFutures standard. The implementation of the project and the scientific monitoring of the impacts on the climate at Gelliner Bruch are coordinated by the Ministry of Agriculture and the Environment for Mecklenburg-Western Pomerania, in collaboration with the Landesgesellschaft Mecklenburg-Vorpommern (The Rural and Regional Development Association of Mecklenburg-Western Pomerania), who acquired the land upon which the project was implemented.